Cryolophosaurus was a medium-sized theropod which lived in Antarctica during the early Jurassic period. Its name means 'frozen crested lizard'. Cryolophosaurus was a vicious, agile predator. Its unique feature is the crest shaped like a Spanish Comb. It was too fragile to be protective, but instead it may have been used during mating season. Crests have also been featured on Dilophosaurus and Monolophosaurus.

Cryolophosaurus appears in Warpath: Jurassic Park as one of the six unlockable dinosaurs. It can be unlocked after Triceratops, and right before Albertosaurus. Its stage is a desert valley.

Its move pattern was the same to that as Tyrannosaurus rex and Acrocanthosaurus. It has fast but weak attacks and combos. However, instead of biting, this Cryolophosaurus uses its crest to attack. This is considered inaccurate, because the crest of Cryolophosaurus is too fragile to be used for combat; in other words, its crest would shatter the first impact it made.

It has 3 different colors: black, light orange, and green. 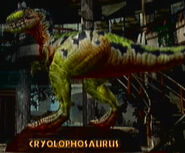 Concept design of a Cryolophosaurus figure (on the right) 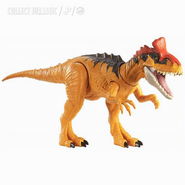 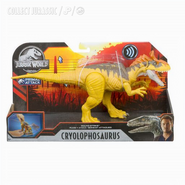 Cryolophosaurus was considered to appear in Jurassic World: Camp Cretaceous, where a baby was set to play a major role, but it was replaced by Bumpy the Ankylosaurus.