The Dakosaurus was a species of marine crocodile that was discovered in a rich fossil bed in Argentina. It lived during the Late Jurassic and the Early Cretaceous periods.

It appears in the game Jurassic Park: Builder,  where it is a limited creature in the Aquatic Park. 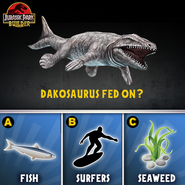 It appears in the game Jurassic World: The Game as a super rare cave creature in the aquatic park. In all evoultions, it has a sail down its back, unlike its real life counterpart.

Maxed Dakosaur in the Battle Arena

Base Dakosaurus in the Battle Arena

Level 40 Dakosaur spinning during its' special