Dakotaraptor is an extinct genus of large dromaeosaurid theropod dinosaur that lived in North America during the Late Cretaceous period around 66 million years ago. Fossil remains have been found in the Maastrichtian stage of the Hell Creek Formation, indicating that Dakotaraptor was one of the last surviving dromaeosaurids. It was built more for running long distances like a wolf or cheetah compared to it's relative the Utahraptor. It lived alongside Tyrannosaurus rex, Triceratops, Ankylosaurus, Edmontosaurus, Pachycephalosaurus, Quetzalcoatlus, and Mosasaurus. Do to it's rarely in the Formantion it's been given the nickname The Ghost of the Forest.

Dakotaraptor is featured in the game Jurassic World: Alive. In the game it is depicted being covered in a coat of jet black feathers including wings, a tail fan and a feathered crest on the back of it's head. You can combine it with Gorgonops to make Dakotanops. 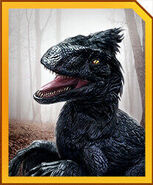