Pineda was born in Oakland, California in either 1987 or 1988. She is of Mexican heritage and identifies as Mexican-American and American.

Pineda's career as an actress began in the 2010s. She was featured on the YouTube Channel / Internet site CollegeHumor in multiple roles. She then starred on such shows as The Vampire Diaries, Homeland, The Detour, and American Odyssey. Some of her film roles include Mr. Roosevelt and Sleeping with Other People.

In late 2018 - early 2019, Pineda was cast in the live action version of the anime Cowboy Bebop in the role of Faye Valentine.

As shown in behind the scenes commentary and in interviews, the overall look of Zia Rodriguez was somewhat inspired by Daniella Pineda herself. J. A. Bayona informed Pineda that Zia was a character whom looked liked she fashioned her own hairstyle and her own outfit. Pineda still required help on finalizing a hairstyle from the on set stylist and had a short bobbed haircut.

In the film, Zia Rodriguez is shown with various tattoos on her body that were chosen by Pineda. One of which is "Semper Fi" the motto of the United States Marines which Pineda explained as part of her characters backstory. Pineda also said that a scene was deleted which revealed Zia was in fact a lesbian. Said scene was in conversation with Chris Pratt 's character Owen Grady . While the scene was cut, it is possible and Pineda's perspective that Zia is attracted to women. 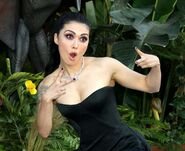 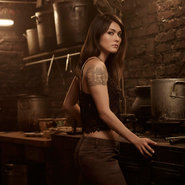 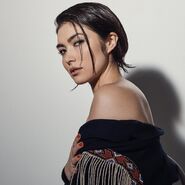 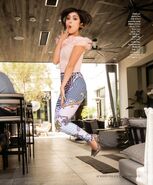