He is an African-American teenager and one of the campers at Jurassic World's Camp Cretaceous. He won the chance through beating a Jurassic World themed video game, winning the himself the opportunity to participate on Isla Nublar in the summer of 2015. His character is voiced by Paul-Mikél Williams.

Sometime in the year 2015, Darius became the first player to beat a Jurassic World video game in the world. Winning the game won Darius the chance to attend "Camp Cretaceous", a summer camp program at Jurassic World. Upon arriving at Camp Cretaceous Darius is introduced to his fellow campers Brooklynn, Kenji Kon, Sammy Gutierrez, Ben Pincus and Yasmina Fadoula. Although Darius is obviously the most passionate of the campers and the only one interested in dinosaurs.

The campers are soon introduced to their Camp Counsellors Dave and Roxie. Throughout the series Darius is provided many opportunities to fulfil he and his fathers shared ambition of visiting Jurassic World. Darius saw dinosaurs up close and drove a gyrosphere. In Things Fall Apart the campers are separated from Dave and Roxie, and with Indominus Rex and other dinosaurs out of containment, are forced to fend for themselves.

Eventually in End of the Line the campers having defeated Toro make their way back to the main dock, intending to catch the ferry to the mainland and return home. However upon arriving the ferry has already left, leaving Darius and fellow campers stranded on Isla Nublar and marking the onset for Season 2.

Darius leads everyone to Main Street in the hopes of sending out a distress signal. After a day of searching in vain for a beacon to send for help, he has a nightmare of Ben Pincus still being alive and blaming him. He's woken up by Yasmina Fadoula, and while with her he realizes that the beacon is disguised. After they find the beacon in the T-Rex's lair, he and Kenji Kon invade the lair and activate the beacon before fleeing.

Realizing that Main Street and several other areas are unsafe, Darius and the others try to keep themselves safe until help arrives, eventually building a shelter at their old destroyed camp caused by the Indominus Rex. While looking for food, Darius, Sammy and Brooklyn find themselves being chased by two Baryonyx's. Darius frees three Stegosauruses from the cages to distract the Baryonyx's, but also releases the last Baryonyx since they are a family.

On one morning when Brooklyn, Yasmin and Sammy investigate a noise and frozen flowers she witnessed earlier, Darius and Kenji investigate what happened to the water (Water drained). The two successfully fix the water problem by goading a Stegosaurus into hitting a long, resulting in the water flowing again. After the water starts flowing again, the two head to a water hole and see several herbivores and carnivores drinking water, to which Darius says Dr. Alan Grant theorized that this is a neutral ground for all dinosaurs. Later that night, the campers spot a fire, making them believe there are people.

When they arrive however, they don't see people at first, and are instead attacked by a dinosaur. Fortunately they are then saved by three human beings named Mitch, Tiff and Hap, with the former two being a married couple and the latter being their tour guide. after being saved, Darius and the campers are taken to Mitch's and Tiff's camp, which they greatly enjoy because they have tents, beds and food. Darius bonds with Mitch for their love for dinosaurs, and takes both Mitch and Tiff on a brief tour to see dinosaurs. Darius however is unaware that Mitch and Tiff are hunters and are just using him so they can find dinosaurs to kill.

Darius is the last person to find out about their motives. Once he finds out, Mitch threatens him into helping the two, with either killing the group or the dinosaurs on the island; demanding Darius to take them to the watering hole. Darius starts guiding them to the watering hole, along with Sammy and Yasmina, but when Mitch tries to shoot a dinosaur, Darius reveals their location and the dinosaur scatters everyone. Darius gives Yasmina a piece of paper and she manages to escape in the confusion, but Darius himself and Sammy are quickly recaptured.

Darius directs everyone to different jobs to stop the hunters, but soon leaves to try and stop them alone, trying to be a hero. Before the confrontation can truly begin, Brooklynn runs over the hunters in a Gyrosphere. She gets out and starts having a "touching moment" with him, saying he was wrong, but in actuality they were just stalling the hunters until the other campers could drive away the dinosaurs from the watering hole. While the hunters witness this, Darius and Brooklynn pile into the Gyrosphere and run. However, Darius crashes the Gyrosphere and the hunters briefly close in, but they run when they see the stampede, which slams into the Gyrosphere and sends Darius rolling. Eventually the Gyrosphere turns on again and they speed ahead, but Tiff beats them to the docks and escapes in her boat before they can get on it.

Dejected, Darius goes back to the island, but is delighted to see Ben in person again and he apologizes for letting him fall. They all group hug, and Darius says they'll find their own way off the island.

Darius is a whip-smart but withdrawn kid who is very passionate about dinosaurs. This interest he shares in common with his father Fredrick and what bonded them together. After his father's passing, Darius wanted to fulfill their shared dream of visiting Jurassic World. At first Darius has some trouble befriending the other campers due to being the youngest of the group and seemingly the only one interested in dinosaurs. Initially, Darius seems to conflict with the brash Kenji Kon. But after the two survived an encounter with Toro, the two had a begrudging respect for each other. Darius also seemed to not get along well with Brooklynn due to her disinterest in dinosaurs and focus on her social media, but the two would begin to bond after being saved from a quicksand pit. When the Indominus rex escaped and the children found themselves on their own, Darius took charge in leading them to survive. In spite of being unsure and not knowing what to do for every situation Darius displayed courageousness to protect the other kids, with the others (excluding Ben who was presumed dead) eventually telling him that he is the reason they have survived.

In season 2, Darius is still shown to be a devoted leader that desires to help his campers. He bonds more with his campers, particularly Kenji. This season however, shows him to be gullible and easily manipulated (to an extent), as he bonds with Mitch to the point that he refuses to believe that he and Tiffany are up to something, despite the others (Brooklyn in particular) being suspicious. He forms a fatherly bond with Mitch, which likely explains why he is easily manipulated by the latter. After learning that Mitch and Tiffany are hunters and villains, he expresses a lot of guilt for not listening to Brooklyn. His guilt over not saving Ben is still present. After being reunited with Ben, he is overjoyed that he is still alive.

Season 3 shows his leadership style continuing. His guilt over letting Ben goes is present to the point that he fights Ben because the latter wants to stay on the island, and even says that he would not abandon him again during their fight. By the end of the season however, his friendship with Kenji is strained, due to the latter being angry at him for putting Brooklyn's life at risk.

Darius has brown eyes, dark skin and black hair. He wears a yellow and black hooded jacket (appears in three episodes of Season 1) later it's been replaced by a white t-shirt after leaving it behind at the ruins of the bunkers and he wears it mostly during through Season 1 and 2 while stranded on Nublar. Also wears light blue jeans, black and white sneakers. Including wears a raptor tooth necklace (was mention in Things Fall Apart, that he left it behind at the camp during through the Indominus Rex Outbreak). Later in season 2, the necklace was discovered and recovered by Sammy in the debris.

During through Season 3, Darius' sideburn haircuts have grown back while still stranded on Isla Nublar with the other campers.

In the episode "Safe Harbor" Darius wears a pair of yellow swim trunks. This may indicate that his favorite color is yellow. 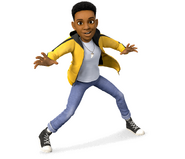 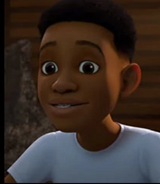 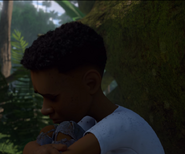 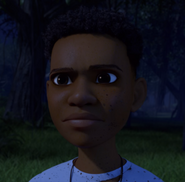 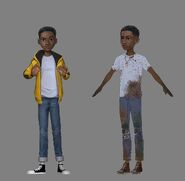 Add a photo to this gallery
Retrieved from "https://jurassicpark.fandom.com/wiki/Darius_Bowman?oldid=270387"
Community content is available under CC-BY-SA unless otherwise noted.