Dave is a character in the Netflix series, Jurassic World: Camp Cretaceous. His character is voiced by Glen Powell.

Dave is a camp counselor at Camp Cretaceous. Unlike the assertive and at times strict Roxie, Dave is shown to be funny, laidback and a goofball. Despite his laidback personality, he shows a lot of seriousness and at times assertiveness when the kids lives are in danger, most notably yelling at Darius and Kenji for sneaking into a Velociraptor Paddock, where they were nearly attacked.

When the Indominus rex escapes, he and Roxie are in waiting to talk to Claire Dearing. After Roxie picks the lock of a cabinet revealing sets of ACU walkie-talkies, they hear roaring and screams over the radios, and the life monitors turn red. He and Roxie set out to find the kids, tracking their ACU tablet. However, when the signal is gone after the table falls out of Yasmina's pocket and into the water due to an attack by the Mosasaurs in the Jurassic World Lagoon, both Dave and Roxy are frightened and concerned. Later, when they arrive at the Lagoon, they notice the kids on the monorail. They yell out to them, but to no avail, as the kids don't notice them. The two then leave after hearing Toro's roar.

They manage to reach the doc, but are unable to find the kids. Eventually, they are forced to board the evacuation ferries by a staff member. Dave and Roxie are last seen attempting to turn the boat around to return to Isla Nublar and pick up the campers and are presumed to have failed.

Dave isn't seen, but his demo of him performing a goofy remix was found by Kenji in his old bunker after the kids took refuge at the camp.

Dave doesn't appear, but Darius reminds Kenji that Dave and Roxie saved them from the Velociraptors, when they encounter Blue.

Dave is known for being both a slacker and a goofball, and somewhat of a prankster, hoping to be recognized for his comedic genius. However when the kids lives are in danger before and after the Incident, he shows just as much seriousness in helping the kids than Roxie. 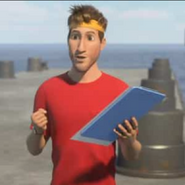