Death Dodo, also referred to as the Dodo defense project, is a purple Dodo with a feather crest on its' head and prominent feathers on the bird's breasts. It has "cracks" in which light will occasionally flash and also has electricity pulsing from the animal as seen when it steps, attacks, gets up, or roars. It is unknown if Death Dodo is a hybrid or simply a genetically enhanced Dodo. Its only appearance so far is Jurassic World: The Game.

The Death Dodo starts out with 2,758 HP but only 126 damage per hit to possibly make Death Dodo easier to fight against. Each time it is beaten, it revives with twice the amount of HP and damage. It repeats this until it defeats every dinosaur in the player's party. The purpose of this battle is not to defeat the Death Dodo, but to deal as much damage as possible.

The best strategy to deal as much possible damage to Death Dodo is different to defeating enemies in the live arena. it is best to reserve at first and attack heavily since Death Dodo blocks much less than opponents in the live arena due to the fact that he can not lose. It is also wise to have a meat shield and 2 heavy attackers to deal damage while the meat shield absorbs damage and buys time to reserve actions. It is also advised to be more defensive to protect from Death Dodo's heavy hits and since Death Dodo reserves more and blocks less since he can not lose. 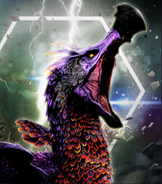 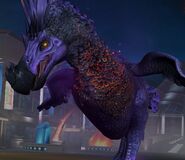 Retrieved from "https://jurassicpark.fandom.com/wiki/Death_Dodo?oldid=229498"
Community content is available under CC-BY-SA unless otherwise noted.