Jurassic World (Hybrid use only) [1]
Jurassic World: Fallen Kingdom (On holographic screen of Indominus only)

Deinosuchus was a giant relative of the alligator that lived in North America during the Cretaceous period and probably hunted hadrosaurs. Despite its appearance and name, Deinosuchus was more closely related to alligators than to crocodiles. It is estimated to have been 12 meters (39 feet) long and much larger than modern alligators, they are believed to have had lifespans of eighty years, far longer than most dinosaurs. Deinosuchus is sometimes referred to as Phobosuchus.

It was only encountered in the arcade The Lost World: Jurassic Park game in the second stage, "The King of the Lakeside" as the second boss. As the players arrive in the lake on Site B, they fight off a pack of Velociraptors only to have the Deinosuchus attack and devour a raptor. After a few shots, the player(s) defeats the beast only in seconds another Deinosuchus appear, however it is easily defeated, with only a few shots.

Deinosuchus from the Arcade Game.

It is also one of the animals available in Jurassic Park: Builder. For some reason, it is located in the Glacier Park alongside Cenozoic animals, despite being a Mesozoic semi-aquatic creature and native to tropical climates. It also more closely resembles Sarcosuchus in appearance. It also seems to completely lack osteoderms on its body. 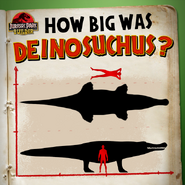 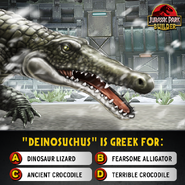 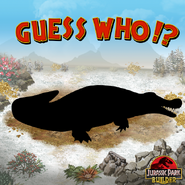 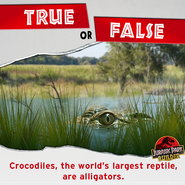 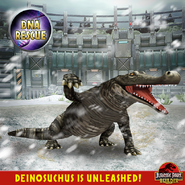 Deinosuchus appears is featured in Jurassic World: The Game as a Tournament creature. Despite being a crocodilian, Deinosuchus is placed in the Amphibian group like all of the game's crocodilians.

Base Form in Jurassic World: The Game

Deinosuchus is mentioned in Jurassic World Evolution 2 in the database entry of Indominus rex as its DNA being used for its creation.

A Deinosuchus toy was meant to appear in the Jurassic Park Junior toy line in a playset with Ichthyosaurus, and even made it to prototype stage, but was cancelled for unknown reasons. 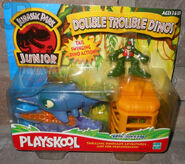