Deinotherium was made creatable in the Biosphere for Jurassic World: The Game on October 26, 2017 as a Legendary snow creature. It was demoted to a Super Rare in Update 38.

Deinotherium is unlocked by completing battle stage 40 as of Update 39. Additional individuals can be purchased in the market for 1,600 DNA or found through card packs.

"Deinotherium is Latin for "terrible beast". This giant mammal is similar to modern elephants, but has a shorter trunk."

"At fifteen feet tall and weighing 8-12 tons, Deinotherium is twice as heavy as a modern African bush elephant!"

"Like modern elephants, Deinotherium has a deceptively human-shaped skull. Fossil finds may have inspired medieval myths of bipedal giants!"

"Deinotherium may have been hunted by prehistoric relatives of modern man. Their bones are often found together in archaeological sites!" 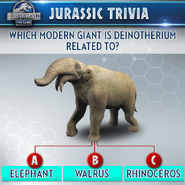 Add a photo to this gallery
Retrieved from "https://jurassicpark.fandom.com/wiki/Deinotherium/JW:_TG?oldid=231821"
Community content is available under CC-BY-SA unless otherwise noted.