"Delta! I see you. Back up!"
—Owen Grady warning Delta to stay back.(src)

Delta was a Velociraptor that was trained along with the rest of her pack by Owen Grady. She is known for being responsible for the death of Vic Hoskins. She's the second oldest of the four raptors.

In the film Jurassic World, Delta is a teal color, with no stripes on her back or tail. Charlie looked similar to Delta, except Charlie was a darker green with black stripes. While some state Blue is the largest raptor, Delta appears to be a bit larger and stockier. Like with all the raptors seen on screen, Delta has a unique head from the other raptors by having extra nodules toward the front of the nose and past the eye ridges, making her remarkably similar to the raptors from Jurassic Park III.[1]. Delta is extremely aggressive and displays characteristics of the Jurassic Park raptors. She is arguably the most dangerous velociraptor InGen ever cloned as she is larger than the Jurassic Park raptors, and more intelligent and just as aggressive.[2] As a baby, she was a darker teal color with a tan lower jaw, and underbelly.[3] She also wore a yellow bracelet around her wrist.

In her LEGO depictions, she is dark tan and beige green, with light blue near the nostrils and around her eye orbits.

In the Hasbro toy line, she is brown with dark blue stripes down her back and has dark green running from her eye orbits to the tip of her snout. In the latest toy line from Mattel, Delta was first depicted as being yellow with dark stripes going from her snout to the middle of her tail, then she became teal like her film appearance for the next line up, but with the addition of dark stripes and a pale green underbelly.

In all of Delta's Hasbro toy depictions, she has Gecko-like pupils which her film counterpart lacks.

Delta was the second Velociraptor to be created by InGen for the IBRIS Project. She was created using more avian DNA[4][5], resulting in more birdlike movements and actions.[5] She belonged to a pack consisting of Blue, Charlie, and Echo. She and her pack were trained by Owen Grady, who imprinted on them in their birth.[2] It is assumed Delta was the second in command of the pack because of her age.

Delta and her packmates assisted their trainer in stopping the genetic hybrid Indominus rex's rampage. After her and her packmates met the Indominus rex, Delta and the rest of the raptors turned against Owen and the others. While Claire was driving the truck, Delta and Echo were chasing behind it trying to kill Claire and the boys. Delta came from behind the vehicle and pounced on a wounded InGen Soldier and killed him. She later pursued the humans with Echo as they tried to escape in the vehicle. She tried attacking Gray and Zach Mitchell, who were in the back of the vehicle, but they were able to stun her with an electric prod.[2]

They soon gave up and after hearing Indominus's roar, they ran off the road and into the trees. Some time later, Delta suddenly appeared unexpectedly before Owen, Claire, and the boys. They are forced to flee after the raptor killed Hoskins, who failed at trying to calm her down by copying Owen's hand gesture. After killing Hoskins, Delta continued her pursuit of Owen, Claire and the boys before being distracted by a hologram of a Dilophosaurus that was activated by Gray, but continued her pursuit after realizing it wasn't real. She was eventually met up with Blue and Echo, who had Owen, Claire, Gray, and Zach surrounded. The Indominus rex soon showed up and ordered Blue and the other raptors to attack the humans. Blue hesitates, and turns against the Indominus. The hybrid swatted Blue into a wall, knocking her out. Delta and Echo team up and fight the Indominus to avenge their fallen leader. During the fight between the Velociraptor pack and the Indominus, Delta was overpowered and thrown into one of the restaurant's burners, where she was incinerated. [2]

In 2018, Delta, as already stated to be incinerated, was confirmed dead, alongside Echo and Charlie. Blue is the last surviving raptor of the pack. The only time she, Echo, and Charlie are shown alive, is in a video of her and her pack being trained by Owen as infants.[3]

Barry appears to be Delta's personal trainer. He understands her behavior when she's hungry. Barry most likely had a closer relationship with her than with Owen.[2] Barry is set to return in Jurassic World Dominion, leading some fans to theorize that Delta will return as Barry played a very small role in Jurassic World outside of Delta.

Delta seemed to take an immediate disliking to Hoskins, as shown when Hoskins was petting her; she hissed and growled aggressively and sinisterly. Barry later tells him that she only does that when she's hungry. Delta's hatred for him was fulfilled when Hoskins attempted to calm her down using Owen Grady's hand signal. It failed and Delta bit Hoskin's arm swiftly and viciously killed him.[2]

Delta is assumed to be Blue's second in command, as she and Blue can be seen communicating and working together many times throughout the film, such as when Leon fell into the Raptor paddock and Blue and Delta were the first to corner him. When the I. rex seemingly killed Blue, Delta and Echo try to avenge Blue, but they both end up losing.[2] 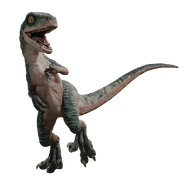 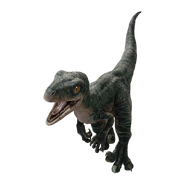 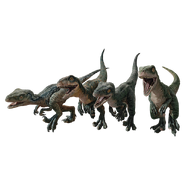 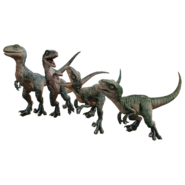 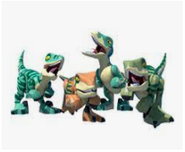 Because several scenes where Delta and Echo are together are in darkness, fans often get the two confused. The most notable instance is that it was originally thought that Echo was the one that was incinerated. This, however, is not the case, as the raptor tossed by the Indominus is brown with blue striping. The only raptor with this coloration is Echo, meaning that it was Delta that got burned. Another, yet not as major of a discrepancy, was that it was initially believed that Echo was the one tazed by the Mitchell brothers. But the raptor in question is green instead of brown, lacks Echo's distinct blue markings, and most importantly, still has her head camera. This means that it was Delta that was tazed.

Interestingly, throughout the film, Delta is seen with both rounded and cat-like pupils. However, there is one instance where it shows both of Delta's eyes having cat-like pupils, but this is not the case. What's even more mysterious is when viewed from the right, Delta's right eye appears with round pupils and when viewed from the left, her left eye appears cat-like. Chances are it could be an error in the film at fault of the producers. One other possibility could be that Delta possesses the ability to change the dilation of her eyes, but it is unknown.[citation needed]

The main skin for the raptor in Jurassic World: Evolution pays a strong resemblance to Delta. 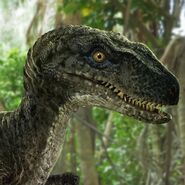 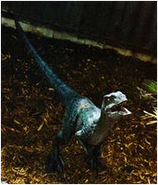