"No wonder you're extinct."
—Dennis Nedry(src)

Dennis Nedry was a computer programmer at Jurassic Park and the secondary antagonist of the orginal Jurassic Park Film. Due to his financial problems and low salary, he accepted a bribe from Biosyn to smuggle dinosaur embryos off the island. His last name is an anagram of nerdy.

In both the film and the novel, he is devoured by a Dilophosaurus. He didn't know a lot about dinosaurs and his greed led to his own demise. He was directly responsible for the events that happened in both the novel and film.

Dennis Nedry was hired by InGen as a computer programmer for Jurassic Park. While working there, he ran into financial trouble and began to believe InGen wasn't paying him enough to do his job during his financial problems. So Nedry decided to accept a job from Lewis Dodgson to steal InGen's dinosaur embryos for $1.5 million dollars so he could catch up on their research. The two met at a restaurant in San Jose, Costa Rica where Lewis Dodgson gave Dennis half of his payment and a can of shaving cream whose bottom was a secret compartment designed to hold 15 of the dinosaur embryos for 36 hours. Lewis also paid for Nedry's meal because of his full cooperation.

Afterward, Dennis Nedry returned to Isla Nublar to go back to work, waiting til night to perform his theft. To get inside the Cold Storage Room undetected, he created Whte rbt.obj, a backdoor that would disable nearly all of Jurassic Park's security except the Raptor Pen. He initiated his plan after he received a call from one of Lewis Dodgson's agents at Isla Nublar's dock who told him that he would be departing the island soon because of the storm despite Nedry wanting to do more testing on Whte rbt.obj.. Just before executing his malicious program, Dennis Nedry alerted his colleagues that he was going to get a soda and that some of Jurassic Park's security systems might be disabled because they were complying files so he wouldn't raise any suspicions, initiating the catalyst of the Isla Nublar Incident of 1993.

With the security disabled and with most of Jurassic Park's workers gone to escape the storm, Dennis Nedry traveled to the Cold Storage Room where he filled his Barbasol can with its dinosaur embryos. He then proceeded to escape the Visitor Center using Jeep 12, traveling to the East Dock to get the rest of his pay. However, the heavy rainfall disoriented him and also got himself lost in the forest, while he was driving on his way to C-3028 ship at the docks, causing him to drive off the road and accidently crash into a fallen tree in the nearby forest. Dennis Nedry responded to this situation by getting out the jeep's rope tow to get it unstuck. While unraveling the car tow he slipped on the mud he was standing on, which led to him losing his glasses, but something far worse was going to happen to Dennis. While tying the rope to the closest tree, a juvenile Dilophosaurus began to stalk him. When he disabled nearly all of the park's security, it disabled many of the security fences that kept the dinosaurs from escaping their paddocks (except for the Raptor Pen), allowing dinosaurs like Dilophosaurus to roam freely.

Nedry became uneasy upon noticing the Dilophosaurus that was following him and quickened his pace, though eventually halted his task temporarily to deal with the carnivorous dinosaur. Dennis tried to distract his stalker by getting it to play fetch, but the Dilophosaur paid little attention to stick he threw. Angered by how his ruse failed, Dennis Nedry insulted the Dilophosaur before proceeding to return to his vehicle, only for him to nearly slip again. When he looked back, the Dilophosaur sprayed its tar-like venom at him. Lucky for him, its venom hit him in his chest, so he was able to crawl away and to open the door to the driver's seat of his vehicle. However, the Dilophosaur spat again, this time successfully reaching its intended target. Nedry desperately tried to get in his jeep as his eyes burned from the poison, but he knocked his head on the roof of the jeep, causing the Barbasol can to get washed away by the rain.

Immediately afterward, Nedry managed to get inside his vehicle. To his misfortune, the Dilophosaurus had gotten into the passenger seat. With the doors of the jeep closed shut there was nowhere for Dennis Nedry to run as the Dilophosaurus proceeded to devour him alive.

Because Nedry never arrived at the East Dock with the shaving can filled with embryos, two people he was supposed to meet with Miles Chadwick and smuggler Nima Cruz went to retrieve the can for Dodgson. While searching for the Barbasol can, Nima found Dennis' body still inside his jeep and briefly investigated his death to see if it could help her find the embryos.

His body was never recovered by the two and it is unknown if the InGen clean-up teams recovered his remains. Whatever happened in regards to his body, his death was never discovered by anyone (except possibly InGen)[1].

Though Miles and Nima managed to uncover the Barbasol can from the mud, it stayed on Nublar and it was never delivered to Lewis Dodgson.

The dinosaurs that were free from their paddocks because of Jurassic Park's security fences being disabled by him caused chaos throughout the park. Though nearly all of the endorsement team and John Hammond's family were rescued during the Isla Nublar Incident of 1993, the remaining humans on Isla Nublar, including mercenary teams hired by InGen to retrieve any remaining survivors, were killed with only a few managing to escape the island. InGen suffered financially from the incident, but it managed to keep itself from bankruptcy. Four years later, Peter Ludlow took the position of CEO at InGen with the proposal of making a Jurassic Park in San Diego, Californa. However, his plan failed, only resulting in a loss of human life like the original Jurassic Park. It wasn't until 2005 that InGen, now under the ownership of the Masrani Global Corporation, created a successful dinosaur park called Jurassic World that lasted over a decade without any major incident.

Wayne Knight joked that he could appear in Jurassic World: "It was small dinosaur and a big meal." He was suggesting that his character would wear an eye patch and have one arm.[citation needed]

Dennis getting spat on
Add a photo to this gallery

A .gif file of Nedry that was a part of Whte rbt.obj.

Dennis Nedry was from Cambridge, Massachusetts. He worked at Integrated Computer Systems. As the novel describes him: "He was fat and sloppy, eating a candy bar, and there was sticky chocolate on his fingers, and flecks of aluminium foil on his shirt." As Project Supervisor of the Jurassic Park Project, he was first told to "design a module for record keeping". Nedry was never told everything, and was always working in the dark. He had become very annoyed with InGen; Hammond continually asked for things which hadn't been included in his original contract, and InGen demanded that they be done. When Nedry refused, lawsuits were threatened and letters were written to Nedry's other clients insinuating that he was unreliable. Nedry had no other choice but to return and carry out the extra work, but for no extra money.

It was this growing disgruntlement that made him receptive when Lewis Dodgson approached him with a plan to steal dinosaur embryos from InGen. Nedry accepted Dodgson's $1.5 million payoff. He recorded one of their conversations as insurance, in case Dodgson tried to rip him off. He then (or had already) coded Wht.Rbt.Obj, a trapdoor program in the code that shut off the security systems and the electrical fences, which would allow him to steal the embryos.

On the night that he had chosen to carry out his plan, Nedry discreetly activated his secret computer protocol, causing security systems to shut down all over the park. Doing it at this moment would leave Grant, Malcolm, Regis, Lex and Tim stranded in their tour vehicles outside the now unarmed Tyrannosaur paddock. He stole the embryos from the freezers, storing them in a specially adapted can of shaving foam given to him by Dodgson, then snuck away from the compound in a gas jeep, heading for the East Dock. Nedry hoped to be able to drive to the dock, deliver the embryos to Dodgson and then return to Jurassic Park and restore the security systems before he was missed. However, "[he] had thought of everything. Except this damned storm." The fierce storm that hit the island that night led to him veering off the road and encountering a dilophosaurus. The dinosaur blinded Nedry with its venomous saliva, ripped his stomach open, causing his intestines to spill out, and then crushed his head in its jaws.

Nedry's remains were later found by Muldoon and Gennaro, by now being devoured by a group of scavenging procompsognathus. Having witnessed all the death and chaos that Nedry's actions had caused at the park, Muldoon had little sympathy, remarking: "They blinded him, then ripped him down the middle. Not a nice way to go. Maybe there's justice in this world after all." When Gennaro asked what they should do with his body, Muldoon just stated they had more important things to worry about and left it where they found it.

His remains were presumed to be destroyed when the entire island was napalm bombed by the Costa Rican Air Force.

Nedry gives players advice in the Jurassic Park SNES game though they are deliberate lies. Like many other characters' ID cards, the player requires his which can be found in the Beach Utility Shed.

In Jurassic Park Interactive, the player's objective was to complete mini-games programmed by Nedry.

He appears in Mr. DNA's tour as someone who can "steal" the DNA from the dinosaurs in Jurassic Park: Paint and Activity Center.

Some of Dennis's background is revealed in Trespasser through Hammond's Memoirs. Hammond apparently found him in Cambridge, Massachusetts (which is also stated in the novel). His compensation for working in exile on Site B was computer time and money. He apparently left a Medieval Mace on Site B in the InGen Labs which Anne can use as a powerful Melee weapon. Several fictitious films are mocked on posters in his office, such as "Invasion from Venus", or several "Kandar" films.

Dennis Nedry appears in LEGO Jurassic World with his role being identical to the Movie canon. However, in the game, Nedry survives by feeding the Dilophosaurus and runs away. He later makes a small canon in LEGO version of the fourth film, where he, along with Donald Gennaro and Robert Muldoon, are hiding in the old park. He can be purchased as a playable character for 100,000 studs (Normal and rain coat). He's armed with the shaving cream can and has the ability to hack. 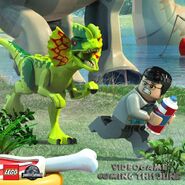 Dennis Nedry from LEGO Jurassic World.
Add a photo to this gallery

If you type the Konami Code

Nedry received an action figure in the original Jurassic Park toyline. The figure does not resemble Nedry in the slightest, mainly due to the fact that the sculptor was asked to create the mold before the movie had even begun production and hence Nedry had not been actually cast.[2]

Dennis Nedry as an action figure.
Add a photo to this gallery

A more movie-accurate figure of Nedry was released as a part of the Jurassic Park Series 2 toy line. His figure came with a juvenile Pachycephalosaurus.