This toyline was produced by Kenner together with Jurassic Park Series 1. It contained 14 metal action figures of dinosaurs and other prehistoric creatures. They were sold in sets, with each dinosaur came a collector's card about the creature. 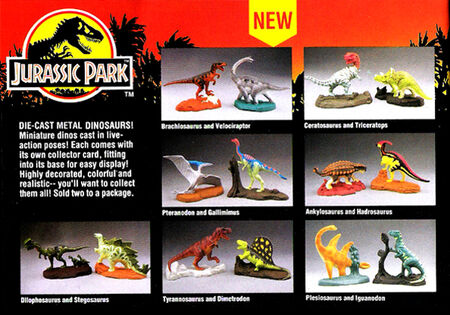 The colors of the Ceratosaurus, red head and lighter body, is very, almost uncannily, similar to the Ceratosaur's appearance in Jurassic Park III.

Retrieved from "https://jurassicpark.fandom.com/wiki/Die-Cast:_Jurassic_Park?oldid=77651"
Community content is available under CC-BY-SA unless otherwise noted.