Dietrich Viggo "Dieter" Stark was a member of the hunting team sent to Isla Sorna to capture the dinosaurs on the island, acting as Roland Tembo's second-in-command. When several incidents led to the team being stranded on the island with a separate team known as the gatherers, Dieter and the others reluctantly join forces with the gatherers for survival.

He was subsequently attacked by a pack of Compsognathus after wandering off alone and becoming lost in the jungle.

Stark was Tembo's second-in-command during the hunting trip to Isla Sorna. His position as number two was one of Roland's conditions for joining the team.

Following the team's arrival on Isla Sorna, Stark joined the mission to capture the herbivore dinosaurs on one of the island's game trails. Sitting in the passenger seat of a modified jeep driven by Carter, he was ordered by Tembo to help subdue an adult male Parasaurolophus (whom the latter dubbed Elvis after being unable to pronounce its name). Laughing at Tembo's expense, Stark then ordered Carter to move him out into the jeep's extendable seat and tranquilized Elvis. Panicking, Elvis fled in the direction of another group of hunters, who subsequently subdued it.

Following the initial harvest, Stark encountered a Compsognathus that snarled at him as he was resting on the edge of the forest and pouring water on his head from his canteen. Immediately after he pulled out his electric cattle prod, paleontologist Robert Burke immediately ran over to identify the creature for him. When Stark asked if the creature was dangerous, Burke replied that it wasn't — advice which would ironically backfire on Stark later on. Stark then mentioned that the creature "gives me the creeps" and that it didn't appear to be scared by their presence, to which Burke informed him that it would have no reason to fear them owing to its lack of interaction with humans. Nonetheless, Stark shocked the creature with his cattle prod, scaring it away before coolly remarking to a surprised Burke that "now he does."

The Attack on the camp

Stark was ordered to guard the team's encampment and ensure that the captured herbivores did not try to escape. However, while he was pacing, Nick and Sarah snuck into the camp and unlocked the dinosaurs from their enclosures. The creatures proceeded to rampage across the camp and destroyed much of the team's equipment. In the chaos, a jeep exploded, forcing Stark to drop to the ground. The herbivores then fled into the surrounding jungle.

Following the camp's destruction, Stark was helped off the ground by two of his colleagues. He was then approached by Tembo, who informed him that his failure to guard the area meant this occasion was the last time he was left in charge. Later on, Stark discovered a broken lock on the ground near a cage, which he handed to Tembo — revealing the true perpetrators of the dinosaurs' escape. It is possible that his relationship with Tembo was restored after this revelation.

Rescuing the gatherers and joining forces

Shortly afterward, two T. rexes attack the gatherers' mobile lab in an attempt to retrieve their infant, who was taken by Nick and Sarah whilst the hunters were dealing with the herbivores' escape. The dinosaurs then push the vehicle halfway over the cliff before leaving. Eddie Carr's attempts to pull the lab back over the cliff attract the attention of the couple, leading to the two killing him and finally causing the truck to be entirely pushed off the cliff. Dieter and Roland rescue the survivors from the cliff while the hunters reunite Malcolm with his daughter.

Owing to his role in the encampment's destruction, Stark easily goads Nick into a fistfight, although the two are quickly held back. However, now that both groups are stranded on an island full of dangerous prehistoric creatures, they reluctantly join forces and trek to the Worker Village on foot to call for help.

Separated from the others

The next morning, the group stops to rest. Dieter informed Carter that he was heading off briefly to relieve himself, and he walked away from the group — failing to notice that Carter was wearing headphones and not listening. Just as Dieter was unbuckling his belt, he overheard a noise in the jungle and approached the source of the sound. To his shock and surprise, a Compsognathus emerged from the bushes nearby. Irritated, Dieter attacked it with his cattle prod, but it managed to escape.

Dieter subsequently returned back the way he came, but after taking several twists and turns, he soon realized he was lost. He called for Carter, although Carter failed to hear him over his headphones. As he continued calling out, he made two big mistakes that would ultimately lead to him becoming separated from the group: Firstly, he didn't pay attention to where he came from, and continued wandering through the jungle while calling out to Carter, who couldn't hear him over his headphones, and on top of that, he neglected to be mindful of the jungle's terrain and watch his footing, which leads to him tripping and falling down a slope, losing his rifle and shock prod in the process.

Dieter eventually landed in a creek below. As he lay on the ground winded by the fall, he was attacked by a pack of Compsognathus, who swarmed Stark and began biting and nipping all over his body. He soon managed to fight them off, although they continued trying to attack him, causing him to angrily charge at them and cause them to retreat. He then proceeded to stumble up the stream and called out to both Carter and Roland.

However, unbeknownst to Dieter, the team eventually moved on without him, not realizing he was missing. The Compsognathus pack soon continued following Dieter, who threw stones at them and splash water at them in self-defense. With the creatures closing in, Dieter picked up the pace and frantically called out for the team.

As Dieter tried to run, he tripped and landed in the stream, where he attempted to relieve the pain from the bite to the lip he received by drinking the water. As he did so, another Compsognathus jumped on his shoulder. As he looked up toward the creature, the rest of the pack attacked him. He again managed to fight the creatures off and quickly got up. Panicking, he ran forward and found a log blocking his path.

Terrified, he weakly climbed over the obstruction and threw himself over the other side. The pack then climbed over the log after him and began to maul him again. Screaming in agony, he was soon ripped apart and killed by the creatures as his blood tinged the nearby stream red.

His remains were later discovered by Roland when the latter goes searching for him. When asked by Ian Malcolm if he was found, Roland comments that he only found "the parts they didn't like", implying that Dieter had been killed.

Stark being appointed to be second-in-command to Tembo indicates a professional mercenary status. He carries himself professionally, going so far as to rescue the people who sabotaged him. He also seems to display some resistance to pain, being angrier about being attacked than in pain following the first Compsognathus attack.

Dieter is seemingly apathetic, even antagonistic towards the dinosaurs. He, like Robert Burke, Peter Ludlow, and the other hunters, seems to have no problem with transporting the dinosaurs off the island to the new zoo.

He is seen to have good relations with his colleagues. Althought Dieter is appointed as Roland's second-in-command, Roland angrily tells him that following the disaster at the game it is "the last time I leave you in charge", implying Roland no longer trusts him, and perhaps indicating past failures. Dieter is shown to have an especially close friendship with Carter. However, he did not like Nick and goaded him into a fight since he was responsible for destroying their camp. Dieter also showed a cruel trait, by shocking a Compsognathus apparently without provocation, although the Compsognathus did snarl at him and give him "the creeps".

Stark's primary weapon was a Heckler and Koch HK 91 fitted with an entry light and telescopic sight. He also carried a collapsible telescopic shock prod as a backup. He lost both when he fell down a slope after getting lost in the jungle. Stark also carried a Dan-Inject JM Standard tranquilizer rifle during the game trail harvest.

Stark before getting killed by a pack of Compsognathus

Dieter getting attacked by Compsognathus

Dieter Stark as a Lego character in Lego: Jurassic World

In LEGO Jurassic World, Dieter Stark doesn't appear so much in The Lost World: Jurassic Park's story mode. The part where he is surrounded by compys is not shown in the story mode, but it is shown in The Lost World: Jurassic Park's hub, and he can be found right in the south-east part of the area surrounded by compys and heard crying out for help, while being safe in a tree branch, and that path to where he is surrounded is blocked with some vines, so the player can use Dr. Alan Grant or Owen Grady to tear off those vines, and the player can use Eric Kirby to scare off those compys with a T. rex Pee Jar, so he can be free, and he becomes purchasable for 60,000. Also, he is eaten by the Tyrannosaur Buck, then later after it gets captured, he is regurgitated along with Carter, Robert Burke and Ajay Sidhu who were eaten as well. 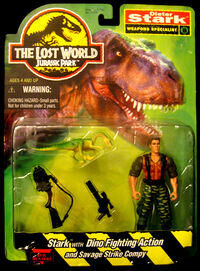 Retrieved from "https://jurassicpark.fandom.com/wiki/Dieter_Stark?oldid=255450"
Community content is available under CC-BY-SA unless otherwise noted.