A paleontological dig site is anywhere where paleontologists dig to uncover fossils from the past. A number of dig sites are seen or mentioned in the Jurassic Park Series. In the first film a huge mistake is made: velociraptor in montana, and in general the USA.

Alan Grant and Ellie Sattler worked at a dig site located in the Badlands near Snakewater, Montana. This is how the site was described in the script:

In the dig itself, the ground is checkered with excavations everywhere. There's a base camp with five or six teepees, a flapping mess tent, a few cards, a flatbed truck with wrapped fossils loaded on it, and a mobile home. There are a dozen volunteers of all ages at work in various places around the dig.  The Volunteers are from all walks of life, dinosaur buffs. Three or four of them have children with them, and the kids run around, like in a giant sandbox.[1]

It was there where they were first contacted by John Hammond and invited to Jurassic Park.

Richard Levine mentioned that a paleontologist named John Roxton had a dig site in Mongolia.

Alan Grant was at a dig site in Fort Peck Lake, Montana in the early parts of the film. Billy Brennan and Cheryl Logan were graduate students working there as well.

In this game you have to search all over the world for dinosaur bones and amber that contain DNA; Alan Grant supervises the work. Occasionally you can find silver, gold or opals. 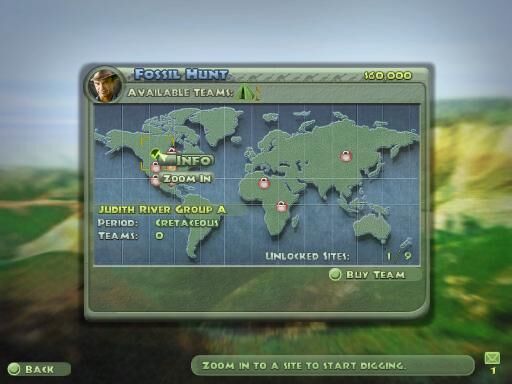 For more information regarding the fossil sites, see Fossil Hunt in the game's article.

In the Jurassic Park film script, there five skeletons of Velociraptor are found at the site. They died together at the same time. Close nearby are the bones of a Tenontosaurus. Grant and Ellie argue that these animals died so close together because they all came to the same dried-up puddle, searching for water because of the drought.