Dilophosaurus is an unlockable dinosaur in Jurassic World: Evolution.

Dilophosaurus fossils are unlocked once the player builds their second Research Center.

“This dinosaur, the Dilophosaurus, lacks front-facing binocular eyes, a trait common to almost every predator. So instead, it hunted by scent. And now, many predators rely on that sense as well.”

"Dilophosaurus uses her distinctive frill to confuse or scare prey, before delivering her venomous spit!"

"Dilophosaurus is infamous for incapacitating her prey with a venomous spray that can cause blindness. If she opens her frill, you'd better be inside a gyrosphere."

Dilophosaurus is a small therapod which feeds from any source of meat.

They form one of the largest of the small therapod social groups and don't tolerate many dinosaurs from other species in their territory.

Dilophosaurus was one of the larger therapod predators of the Jurassic Era. Its name measn "double-crested lizard" in reference to the two crests upon its skull.

As an early predator, it lacked forward facing eyes, so would have relied on scent rather than vision for hunting.

The first Dilophosaurus specimen was discovered in the Kayenta Formation in Arizona, USA in 1942. So far only one confirmed species has been found.

The Kayenta Formation was once a silt-rich river basin with slow-moving water. It supported abundant animal and plant life. 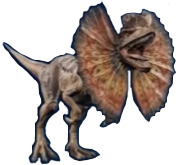 Add a photo to this gallery
Retrieved from "https://jurassicpark.fandom.com/wiki/Dilophosaurus/JW:_E?oldid=235487"
Community content is available under CC-BY-SA unless otherwise noted.