LEGO Jurassic World (as a sticker)

"Running into a Dimetrodon in Jurassic Park would have been an interesting experience - and a dangerous one!"
—Kenner collector card([[|src]])

Dimetrodon was a pelycosaur, one of a number of animals known as Mammal-Like Reptiles (more accurately synapsids) that dominated the Late Permian period. It was a large meat-eater that lived primarily in swampy areas and had a very interesting feature - a large sail on its back. Although often mistaken for a dinosaur, it died out long before dinosaurs evolved and is more closely related to modern mammals.

Unlike other pelycosaurs that did not have fins, Dimetrodon was able to warm up in the morning and cool off more efficiently during the heat of the day due to its sail. This method of controlling its body temperature, along with its large and powerful jaws, gave this predator a distinct advantage over the other large carnivores, making it the dominant land predator. In fact, its ability to warm up faster would have enabled it to catch and eat the slower, non-finned Mammal-Like Reptiles.

Dimetrodon is easily distinguished from dinosaurs as its legs were positioned on the side of its body while dinosaurs had their legs under their bodies. Even with this body structure, it was probably a very fast runner. It had a large head with very strong jaws and two types of teeth -sharp fang-like teeth for ripping and tearing in the front and smaller cheek teeth in the back that were designed for shredding the meat. [1]

This information stood on the collector card from the Kenner toyline:

'Scientists once speculated that Dimetrodon's unique dorsal structure was used as a sail to help the animal swim. Now, however, the more widely accepted explanation is that the spines were involved in regulating body temperature, as blood flowing through the sail could be warmed or cooled more quickly than in the rest of the body.'

Dimetrodon itself doesn't appear in the movies, although a taxedermy of Dimetrodon is seen in Benjamin Lockwood's museum in the Lockwood Manor in Jurassic World: Fallen Kingdom. The statue of Dimetrodon has osteoderms like crocodiles, the skin in the sail are more extensive than the original, the head is more box-shaped and lacks the notch the real animal had in the top jaw.

Several Dimetrodons attacked Maisie Lockwood, Alan Grant, and Ellie Sattler in the Amber Mines. None were seen escaping the forest fire because they were still inside the amber mines during the evacuation. It is possible they are continuing to live in the wild or living in the abandoned amber mines after the abandonment of the sanctuary which is now an international sanctuary.

An animatronic of Dimetrodon at the Los Angeles premiere of Jurassic World: Dominion

Dimetrodon appears on the alternative cover of Jurassic Park: Redemption III. A green Dimetrodon is sitting on a blue car in a car lot. This event never happens in the comic series.

Dimetrodon appears in Jurassic Park: Redemption II, though it is only seen in two images. Dimetrodon is one of the many new species of prehistoric animals that is intended to be in the new Jurassic Park that Tim Murphy and the “unknown” investor created.

Even though Dimetrodon is a carnivore, it’s seen eating the hay that is in its pen. This is one of the many scientific inaccuracies in Jurassic Park: Redemption. This suggests that it may instead be an Edaphosaurus, an herbivorous relative of Dimetrodon or some herbivorous pelycosaur although it more closely resembles Dimetrodon. Alternatively, this could suggest the carnivore is eating hay out of starvation. 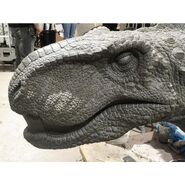 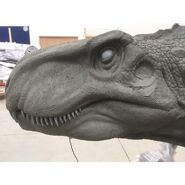 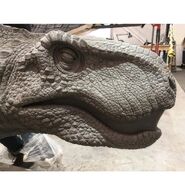 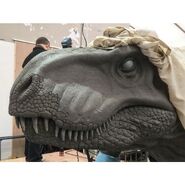 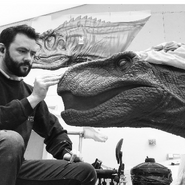