Dimorphodon ("two-form tooth") is a pterosaur believed to belong to the family Rhamphorhynchoidea from the Early Jurassic Period of southern England. The species is unique among pterosaurs because it has two types of teeth like that of a mammal.

Dimorphodon was originally planned to be an attraction for the original Jurassic Park with 36% of its genome being completed before it was put on hold.[1] The pterosaur was recreated by InGen for the Masrani Global Corporation owned dinosaur park Jurassic World.[2]

Unlike the original Dimorphodon, their wingspan was one meter longer than the originals, and they were said to be able to use their back legs for grasping objects like the cloned Pteranodon.[3] The clones could also fly better than the original animal, which could only fly in short bursts. They also have angular skulls, as opposed to the rounded skull of the original animal. Their colors were blue-ish gray or green on top and mostly gray on the stomach with pink or red on its face. On the neck and back, they have thick pycnofibers that all pterosaurs had in real life but is rare in InGen's cloned pterosaurs, although later depictions in Jurassic World media like in Jurassic World: Camp Cretaceous lack these pycnofibres.

Dimorphodon lived in The Aviary as neighbors to the larger Pteranodon.[2][3][4]

During the rampage of Jurassic World's latest attraction Indominus rex, all the residents in the Aviary, including Dimorphodon, were freed when the Indominus rex broke into the Aviary in its rampage, creating a large opening the Aviary. The pterosaurs then escaped and wreaked havoc on the island. A mixed flock of Dimorphodon and Pteranodon traveled to the Main Street of Jurassic World where they attacked the human visitors in the area, when Gray, Zach and Zara were stuck in the Main Street. Gray attempted to run to safety but this almost led to him being decapitated by a Dimorphodon but luckily Zach pulled him back just in time. One Dimorphodon attempted to attack Owen Grady by pouncing on him and tried to maul his face but it was shot down by Claire Dearing who picked up a dropped gun.[2]

One Dimorphodon managed to fly out of Isla Nublar, but was soon sniped by an InGen Soldier who saw it flying when he was being transported to the island. After the incident, any remaining Dimorphodon were flying wildly on the island.[2]

While no Dimorphodon appeared in Jurassic World: Fallen Kingdom, it has been revealed that there were surviving Dimorphodon populations on Isla Nublar, but as none were seen being taken to Lockwood Manor, it can be assumed that the species has fallen back into extinction, although being capable flyers, they may have flown off the island like the Pteranodons are seen doing so at the end of the film. However, some Dimorphodon were seen on a news cam at the beginning of the film while the newscaster talked about the Jurassic World Incident.[5]

Dimorphodons are seen in a news report showcasing the pterosaur attack on Mainstreet.

By 2022, the Department of Prehistoric Wildlife Dimorphodon had been sighted in Miyajima Japan, Bali Indonesia, and Perth Australia. The DPW notedDimorphodon being a common species to be illegally kept as pets.[6] 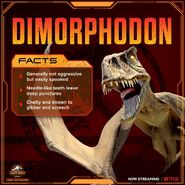 Dimorphodon's appearance in Jurassic World is similar to the portrayal of Anurognathus in the ITV series Primeval, which is a small pterosaur from the Jurassic like Dimorphodon that attacks humans in flocks.

Patrick Crowley, the producer of Jurassic World, has said that he is a "big fan" of Dimorphodon.[7] It, along with the Mosasaurus, was also a favorite animal of Colin Trevorrow, the director of the film, as well.[8] They were one of two quarternary antagonists in Jurassic World, alongside the Pteranodons. 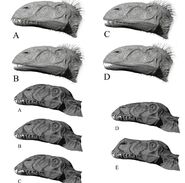