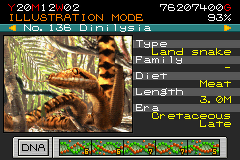 Dinilysia is an extinct genus of snake from the Late Cretaceous of South America.

Dinilysia never appeared in the Jurassic Park novels or movies.

It has however appeared in Jurassic Park III: Park Builder. Strangely, it looks nothing like a snake once it is placed in the actual park. It comes from the family Diniysiidae, which is not listed in the game, oddly.

Retrieved from "https://jurassicpark.fandom.com/wiki/Dinilysia?oldid=253893"
Community content is available under CC-BY-SA unless otherwise noted.