Diplodocus is a very famous giant Jurassic plant-eater. It was a huge, long-necked dinosaur, reaching lengths of up to 30 meters (100 feet) long. In fact, it is the longest complete dinosaur skeleton ever discovered. Since its hind legs were longer than its front legs, Diplodocus probably ate plants that were low to the ground. It was so big, however, that it could push trees over in order to get the leaves at the top down to the ground. It would probably stand on its hind legs to push, but it could not hold that pose for very long, because of the animals great mass.[2]

Diplodocus is the namesake of the diplodocid family - long neck, pillar-like legs, long tapering tail and enormous size. It had, like the other family members, peg-like teeth in an elongated head that seemed very small for such a large creature. There is much speculation about how much these creatures needed to eat and how such a small head could ingest enough food to fuel such a large body. Some scientists have stated that these huge, small-headed creatures would have needed to eat every waking moment in order to provide enough food to keep such a large body alive.[2]

Like many other large sauropods, Diplodocus probably swallowed stones which it kept in a gizzard similar to that found in a chicken to facilitate digesting food. The tough plant fibers would spend time in the gizzard stewing and being ground up by the stones. There is some speculation about the use of the very long tail of Diplodocus and other members of its family. If it was used as a weapon, it would be very deadly. Because of its length, the speed at the tip, if swung forcefully, would have been very high, possibly faster than the speed of sound.[2]

Diplodocus is known from two species, one of which was longer than the other. The longer species was originally classified under its own genus, Seismosaurus, until scientists concluded it was a new species of Diplodocus.

Though no living animals of this species make an appearance in the film, a Carnegie model of a Diplodocus can be seen in Alan Grant and Ellie Sattler's trailer when John Hammond comes to request them to come to Jurassic Park.

Though no living animals of this species make an appearance in the film, two statue juvenile Diplodocus appear in front of a painting of a herd of adult Diplodocus.[3] 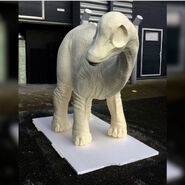 In the storyboard for Jurassic World Diplodocus was supposed to be one of the dinosaurs living in the Jurassic World park but was replaced by its relative Apatosaurus in the final film.[4]