Jurassic Park: Builder
Jurassic World: The Game
Diprotodon, meaning "two forward teeth", is the largest known marsupial ever to have lived. Along with many other members of a group of unusual species collectively called the "Australian megafauna", it existed from approximately 1.6 million years ago until extinction some 46,000 years ago (through most of the Pleistocene epoch). Australia, which already had a warm climate started to heat up, Diprotodon could not adapt to the harsh heat and started dying off. Its now dwindling poulation was hunted to extinction by humans. Predators like Thylacoleo or Megalania soon also became extinct without their food source.

Diprotodon species fossils have been found in sites across mainland Australia, including complete skulls and skeletons, as well as hair and foot impressions.Female skeletons have been found with babies located where the mother's pouch would have been. The largest specimens were hippopotamus-sized: about 3 metres (10 ft) from nose to tail, standing 2 metres (6.6 ft) tall at the shoulder and weighing about 2,800 kilograms (6,200 lb).

Although it is extinct, some people believe that the Diprotodon could be still alive today as a cryptid called the Bunyip (the Bunyip was a beast that Aboriginal tribes feared), but people do not have evidence for this creature being alive.

Diprotodon can be created in the Glacial Park of Jurassic Park: Builder. It can be obtained in Tournament mode. 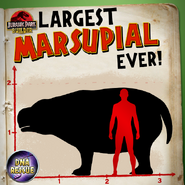 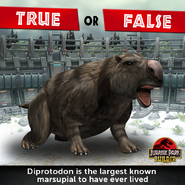 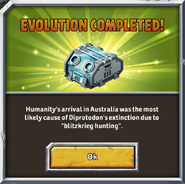 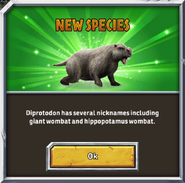 Diprotodon appears in the Cenozoic Biosphere of Jurassic World: The Game as a Rare Snow creature. Because it uses the Sarkastodon animations it is innacurately portrayed as a grizzly bear-like carnivore/piscivore with large canine teeth, while in reality it was a herbivore with rodent-like incisors related to wombats and koalas.