Doedicurus was added to the Biosphere for Jurassic World: The Game on June 7, 2017 as a Super Rare cavern creature.

Doedicurus is unlocked by completing its "Glacial Shift" battle event. Additional individuals can be purchased in the market for DNA or found through card packs.

"An ancestor of modern armadillos, this armored mammal stands 5 feet tall and has a spiked tail it uses like a mace!"

"Doedicurus is a glyptodont, a prehistoric family of giant armadillos. In fact, it's the largest glyptodont to ever live!"

"Fossils of some Doedicurus shells show fractures consistent with their tails! This means that they dueled each other!”

"It's possible Doedicurus store energy and liquid inside a hump under their dome, just like a modern camel!" 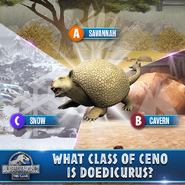 Add a photo to this gallery
Retrieved from "https://jurassicpark.fandom.com/wiki/Doedicurus/JW:_TG?oldid=232047"
Community content is available under CC-BY-SA unless otherwise noted.