Dolichorhynchops is an extinct genus of polycotylid plesiosaur from the Late Cretaceous (early Turonian to late Campanian stage) of North America, containing three species, D. osborni, D. herschelensis and D. tropicensis. Dolichorhynchops was an oceangoing prehistoric reptile. Its Greek generic name means "long-nosed face". Despite being fast and agile, it was likely prey for the mosasaur Tylosaurus, the sharks Cretoxyrhina and Squalicorax and the fish Xiphactinus.

Dolichorhynchops is an adoptable animal in Jurassic Park: Builder and is obtainable through the DNA Rescue of Tournament mode only. 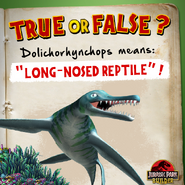 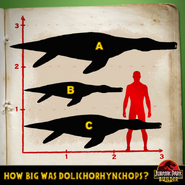 Dolichorhynchops can be created in the aquatic park in Jurassic World: The Game. The game has the Dolichorhynchops in all evolutions have horns like a rhino and claws on its' flippers, much like the wings of a pterosaur, which is inaccurate. 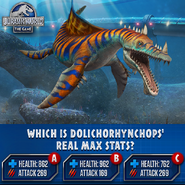 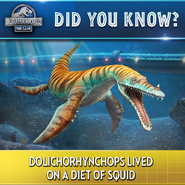