Dolichorhynchops was added to the Aquatic Park of Jurassic World: The Game on December 7, 2016 as a Super Rare reef creature.

Dolichorhynchops is unlocked by completing its battle event. Additional individuals can be purchased with 2,000 DNA or found through card packs.

"Did you know that Dolichorhynchops means 'long-nosed face'? It gets its name from its long snout!"

"The Dolichorhynchops has long, thin teeth and a powerful bite which it uses to capture fish."

"Because the Dolichorhynchops swallowed its prey whole, it would swallow small stones to aid with digestion."

"At 10 ft in length, the Dolichorhynchops is larger than an average car!" 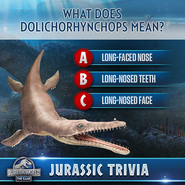 Add a photo to this gallery
Retrieved from "https://jurassicpark.fandom.com/wiki/Dolichorhynchops/JW:_TG?oldid=229997"
Community content is available under CC-BY-SA unless otherwise noted.