Dracorex is an unlockable dinosaur in Jurassic World: Evolution.

Dracorex fossils are unlocked once the player complete the mission "a commercial park" for the entertainment division on Isla Matanceros.

“All hail the 'dragon king'. The Dracorex. Sounds so intimidating. But, it's just a plant-eater. However, just in case they do rule the earth again, don't tell them I said that.”

"The only Dracorex species known in the genus is Dracorex hogwartsia, so named after the Harry Potter books by J.K. Rowling."

"Dracorex means "dragon king" because of the crown-like bony forms on her dragon-like skull. She once roamed North America."

They live in moderate social groups and also prefer to have a variety of other dinosaurs nearby.

They like good open grassland areas with a slightly smaller coverage of forest.

They are vulnerable to most predators, but can defend themselves from small carnivores.

Dracorex was a Pachycephalosaur that once lived in North America. Its name means "dragon king" because of the crown-like bony forms on its dragon-like skull. The only species in the genus is Dracorex hogwartsia, named after the Harry Potter books by J.K. Rowling.

There is some discussion as to whether Dracorex and the very similar Stygimoloch are actually earlier growth stages for the Pachycephalosaurus.

The only remains for Dracorex were dicovered in the Hell Creek Formation in South Dakota. So far only a skull and some skeleton fragments have been recovered.

The Hell Creek Formation contains a wealth of dinosaur remains, including aquatic animals. It was a low floodplain and the rich soil supported a range of plants. 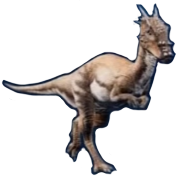 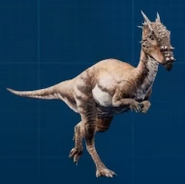 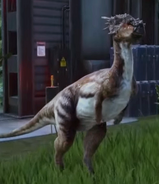 Add a photo to this gallery
Retrieved from "https://jurassicpark.fandom.com/wiki/Dracorex/JW:_E?oldid=221924"
Community content is available under CC-BY-SA unless otherwise noted.