Jurassic Park III: Park Builder
Dromiceiomimus  ("emu mimic') was a swift bipedal ornithomimid dinosaur from the late Cretaceous period, about 80 million to 65 million years ago. It was probably omnivorous, as were most ornithomimids. It was a relative of Gallimimus. Many scientists now believe that Dromiceiomimus is a synonym of the more well-known Ornithomimus, as it lived in the same time and place and was very similar. 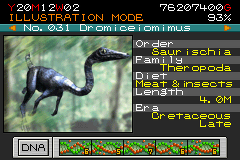