This diminutive herbivore is both swift and agile. Lacking any other defensive abilities, its only means of defense is to flee any predators. It lives in herds to guarantee early warning of nearby predators.[2]

Dryosaurs are mentioned in the chapter The Park of the first novel:

In the harsh quartz lights, the hypsilophodont's green head hung down out of the sling, the tongue dangling, the eyes dull. ... The hypsy was a small dryosaur, seven feet long, weighing about five hundred pounds.[3]

The dryosaur coughed, and then moved slowly across the field, away from the lights.[4]

The Dryosaurus is mentioned to be dark green with mottled brown spots.

Dryosaurus, albeit not mentioned by name, was first seen on the marshy plain by the river to the south with the other herds of dinosaurs. The Dryosaurus were described as medium-sized, dark-green, lizard-like or gazelle-like animals, having perhaps 20 members in its herd, and intermittently poking their large heads up above the grass along the river.[5]

Later on, as Sarah Harding regained consciousness and made her way through the island's jungle she encountered a herd of panicked, dark-green, lizard-like animals about four feet high that were running and leaping away from an attacking Velociraptor pack. Their panicked cries were reminiscent of yelping dogs. One of the animals knocked Sarah to the ground, but Sarah escaped the stampede by climbing onto a tree branch. One of the animals was taken down by the raptor pack. Based on their description, the animals in the herd were most likely Dryosaurus.[6] Interestingly enough, Hypsilophodon also appears in the novel and there are noticeably different descriptions of the two ornithopods.

Dryosaurus appeared in Jurassic Park: Operation Genesis as a 1-star herbivore, the only 1-star dinosaur in the game. They serve as a main prey for many carnivores and has no defenses against any carnivore. They enjoy herding and lack defenses so they run away from danger. They are the favored prey for Dilophosaurus and Ceratosaurus. They were probably an important prey item for the latter in real life as well. Dryosaurus, along with the Ceratosaurus, Pachycephalosaurus, Albertosaurus, Torosaurus and Parasaurolophus, are one of the dinosaurs the player is able to start with.

The coloration is a primary green with brown spots and a faded blue on the face.

Dryosaurus is one of the available dinosaurs on the IOS application, Jurassic Park: Builder. 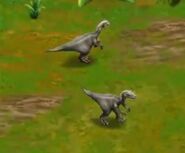 Dryosaurus will be a Herbivore in the Herbivore Pack in the game.