Jurassic Park III: Park Builder
Jurassic World: The Game
Jurassic World: Alive
Dsungaripterus ("Junggar wing") was a pterosaur that lived in the Early Cretaceous period in northwestern China. It had a curved jaw and two crests, one on the top of its head and a shorter one at the rear of its skull. It was first discovered by Chinese scientist C.C. Young in the Junggar Basin of northwestern China in 1964. More complete material was discovered in the same area in 1973.

Dsungaripterus weii had a wingspan of 3 to 3.5 metres (10 to 11.5 ft). Its skull, up to 50 cm (20 in) long, bore a low bone crest that ran down from the base of the skull to halfway to the beak. Dsungaripterus's head and neck were together almost 1 m (3.3 ft) long. Its most notable feature are its long, narrow, upcurved jaws with a pointed tip, making the animal look like a pair of flying tweezers. It had no teeth in the front part of its jaws, which were probably used to remove shellfish and worms from cracks in rocks or/and the sandy, muddy beaches it inhabited. It had knobbly flat teeth more to the back of the jaw that were well suited for crushing the armor of shellfish.

Dsungaripterus can be created in Jurassic Park III: Park Builder as a "Carnivore two" animal. It is Nr.110. 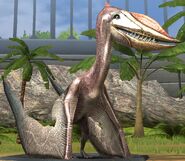 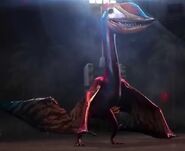 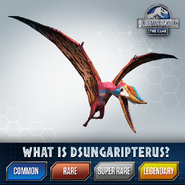 Dsungaripterus is a Rare pterosaur in Jurassic World: Alive added in the 1.4.11 update on September 18, 2018.