InGen built the East Dock between 1989 and 1993 during the construction of Jurassic Park as a shipping port for Isla Nublar.

During the storm that occurred the night of the Jurassic Park Incident, many InGen personal left the island via the East Dock. It was also the location where Dennis Nedry was supposed to meet Lewis Dodgson's acquaintance so he could trade off the Barbasol can Dodgson gave him for his payment. Due to the heavy rainfall, Dennis goes off the road to the dock and ends up crashing his vehicle Jeep 12, as well as damaging the sign for the East Dock. He soon staked it back in place, albeit with its arrow pointing upward. Later he got lost and ran through a fence and got stuck on a tree. While trying to free himself from the tree with the tow winch, he was attacked and killed by a Dilophosaurus, never reaching the East Dock.

The dock's sign remained on the island 22 years later. During some point when the island was again used by Ingen this pier was intended to serve as a Jurassic World utilities prier.

The Arcadia was moored at the East Dock in 2018 during the eruption of Mount Sibo. From the pier would begin the main operation of capturing the dinosaurs, while monitoring everything in the south of the island, in the camp of the team sent by Eli Mills.

The dock has contradicting placements in the films. In Jurassic Park, the east dock is presumably on the east side of the island. This is supported by the Jurassic World map[1] putting Nedry's Barbasol can on the east side of the island near a river outlet, and not far from a location labeled "port" on the original Jurassic Park map. In Jurassic World: Fallen Kingdom, the digital map showed the east dock on the northern part of the island, at the top of the previously known restricted area, and Franklin stated it as such. 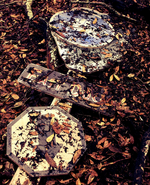 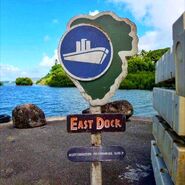 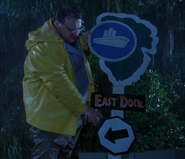 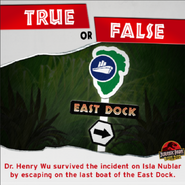 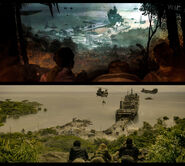 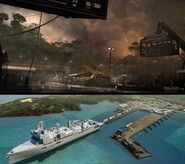 A dock was created for Jurassic Park. It was built around 1987 or 1989. The dock lacked a breakwater structure for it, so shipping takes longer during heavy weather conditions. John Arnold did not like this lack of a feature, especially during the storm during the InGen Incident.

The dock was destroyed along with the rest of Jurassic Park during the Costa Rica Napalm Bombing of Isla Nublar right after the InGen Incident.

The dock is mentioned in the Jurassic Park novel. John Arnold complains that Hammond didn't build a, so docking takes a lot of time during a storm.

Retrieved from "https://jurassicpark.fandom.com/wiki/East_Dock?oldid=263473"
Community content is available under CC-BY-SA unless otherwise noted.