Edestus is a genus of eugeneodontid holocephalid that lived throughout the world's oceans during the late Carboniferous. All of the species are known only from their teeth. The term "edestid" is often used to refer to any or all members of the order Eugeneodontiformes, though, strictly speaking, "edestid" properly refers only to members of the family Edestidae. Edestus is a Greek name derived from the word edeste (to devour), in reference to the aberrant quality and size of the species' teeth. The largest species, E. giganteus, could reach 6 m (20 feet) in length, the size of a modern great white shark.

Like its other relatives, such as Helicoprion, and unlike modern sharks, the species of Edestus grew teeth in curved brackets, and did not shed the teeth as they became worn. In Edestus' case, there was only a single row of teeth in each jaw, so that the mouth would have resembled a monstrous pair of pinking shears. The degree of curvature in the teeth brackets, along with size are distinct in each species.

Edestus can be created in the Aquatic Park of Jurassic Park: Builder. It was at first only purchasable in real-world money. Since April 30th 2016, it became a DNA tournament limited edition.

Edestus is a tournament surface creature in Jurassic World: The Game. 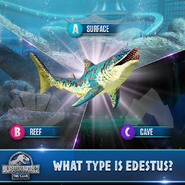 Retrieved from "https://jurassicpark.fandom.com/wiki/Edestus?oldid=239309"
Community content is available under CC-BY-SA unless otherwise noted.