Einiosaurus was a member of the Ceratopsian family, highly successful plant-eating animals from the Late Cretaceous. While many members of this family are known for having hard neck frills, spikes, and horns, the Einiosaurus was one of the most remarkable of the ceratopsians with its nose horn that looked like a giant can opener.

Looking at an Einiosaurus from the front, the most impressive feature would have been the horn growing on its short snout. This horn was long and narrow, and curved down and directly ahead of the animal. Behind the head was a bone frill that contained two large spikes sticking up from the top. This would present a formidable appearance for any predators approaching Einiosaurus.

Bone-bed evidence indicates that Ceratopsae moved in single-species herds, unlike other herbivorous dinosaurs who appear to have traveled in mixed herds. This may mean that Einiosaurus had defensive herd behavior, shielding the young inside the herd by forming a circle whenever danger threatened.

The major controversy concerning the Ceratopsae is the way in which they stood. It is not clear if they had an upright posture like elephants, or a sprawling posture like lizards. The more upright posture would indicate greater speed in relation to predator dinosaurs, but would require the Ceratopsae to have narrow rib cages. A sprawling posture would allow for a bigger rib cage that was more common among herbivores, but would make the animals slower and more vulnerable to attack. The horns and spikes were not of much use as defensive weapons.[1]

Einiosaurus is one of the tournament dinosaurs in the game. 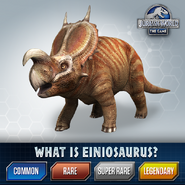 Einiosaurus appears on an interactive display in the Gentle Giants Petting Zoo section.

Einiosaurus was featured in some concept art for Jurassic World: Fallen Kingdom. However, Colin Trevorrow confirmed there were no plans for it to be added to the final cut.