Elasmosaurus was added to the Aquatic Park of Jurassic World: The Game on October 19, 2016 as a Super Rare surface creature.

Elasmosaurus is unlocked by completing its battle event. Additional individuals can be purchased in the market for 2,400 DNA or found in card packs.

"The Elasmosaurus, one of the best known plesiosaurs, is named after the Greek word elasmos, meaning 'thin plate'."

"A relatively slow swimmer, the Elasmosaurus hides itself in the darker depths and uses its long neck to ambush schools of fish."

"The Elasmosaurus lives its life entirely underwater. But instead of laying eggs like a turtle, it incubates an egg internally!"

"While early fossils contructions suggested it coiled its neck like a snake, the Elasmosaurus actually holds its neck straight!" 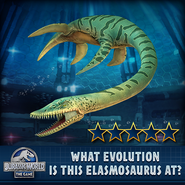 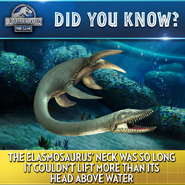 Add a photo to this gallery
Retrieved from "https://jurassicpark.fandom.com/wiki/Elasmosaurus/JW:_TG?oldid=230001"
Community content is available under CC-BY-SA unless otherwise noted.