The electric fences were used to contain the cloned dinosaurs in the park, and some areas of Site B.

The fences were first seen in service on Isla Nublar. They were 24 feet tall and 30 feet long between posts, and 50-80 miles long total. They had a minimum of 10,000 volts to stop the dinosaurs from attempting escape, however, this was a severe problem as well, because it could fry a dinosaur, killing it and making it no use to the public eye. It was also their fatal flaw, when Nedry turned off the electricity power he rendered the 10,000 volt fence a bunch of useless wires.

In the film, the fences are clearly shown to be thick metal supports with electric wiring connecting them, with different versions depending on the paddock and location. Some also had concrete moats near them, such as the Tyrannosaur Paddock. Smaller fences, between five-to-eight feet tall were found near the Dilophosaur Paddock.

In the novel, the electricity fences are very similar to the films depiction, but some appear to have more advanced features; the barriers surrounding the Tyranosaurus range had water-filled moats and coiled-barbed wire around the top. The Safari Lodge's Perimeter fence is made of inch thick bars, instead of wire, as Muldoon and Sattler continuously distract raptors by banging bar-on-bar. The raptor holding pen behind the bamboo groves also had barbed wire on the top of it, as well as chain-linked reinforced fencing.

On Isla Sorna there were several broken down electric fences. A perimeter fence that lined the Worker Village and a stretch of specialized fencing near the Aviary observatory. The Worker Village fencing utilized the same type as the perimeter fencing on Isla Nublar complete with the same style gating. However, the elements had taken their toll on them and by 1997 the wiring and support poles were sagging. Even with the deterioration, the fencing still is capable of running electricity as evident by the lights atop each pole being lit up when Nick Van Owen restores the power to the compound in order to send a distress call. The fencing outside the Pteranodon aviary is very heavily built. A row of thick, albeit hollow bars run parallel to the ground, with the inner sidelined with meshed cable wiring. The topmost bar, 24 feet from the ground, is armed with large spikes pointing in all directions and the perimeter fence is 30 feet between posts. Each section of fencing is connected by large triangular beams.

In The Lost World, Site B's Legend states that there were holding pens on the island, and at one point presumably fences.

The electric fences required at least 10,000 volts of voltage to contain the dinosaurs properly, this is an assumption, as mention is made about whether or not direct current or alternating current was used. Also, it should be noted that it is in fact amperage, not voltage, that can lead to death by electrocution. It is assumed the same voltage was used for all the other dinosaur enclosures, although this number may have been too high a voltage for certain animals. Certainly it's OK for a Tyrannosaurus to take a "mild" 10,000 volt shock, probably along with the Triceratops and Stegosaurus due to their thick hides and size, but that type of voltage would likely kill smaller dinosaurs with the exception of Velociraptors, who had attacked the fences multiple times without suffering any permanent injuries.

The Dilophosaurus in the park, being just juveniles and only 4 feet tall, would probably poke their heads through the fences to get a better shot when they spit their venom. The Compsognathus roamed around in two or three large groups in different enclosures. If one of the Compsognathus were to hit the fence by mistake, it is not likely to survive. Furthermore, Compys are nearly cat-sized and could probably just slip between the wires of a standard fence without getting an electric shock, so the fencing on their enclosures were likely designed differently.

The Tyrannosaurus rex perimeter fence has one main design flaw. You can see that the larger fence posts have ceramic guide bolt to fix each horizontal wire onto the fence post. However between each of the larger posts are a smaller post which each electric wire makes direct contact with, sending the current straight to earth.

As mentioned before, the electric fences are a bit of an extreme measure, having the ability to completely fry a dinosaur. A fence with solid metal bars probably would have worked just as well, without presenting a danger to the dinosaurs, except in the case of one with powerful jaws.

Ha-ha's are landscaping features which recess towards a wall. While preserving an uninterrupted view of the landscape; had those been built the animals would not have escaped even with a power failure. 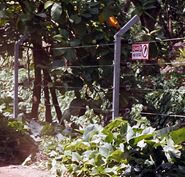