Elginia was a dwarf genus of pareiasaurid known from the Late Permian of Scotland and China. It was named for the area around Elgin in Scotland, which has yielded many fossils referred to as the Elgin Reptiles.

Its most distinctive feature were the spikes on its head, with the longest pair growing out of the back of the skull. 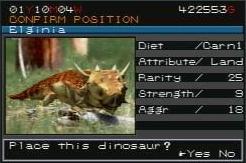 Elginia appears in the game Jurassic Park III: Park Builder. It is classified as a carnivore despite the fact that it was a herbivore. Moreover, in the sentence Place this dinosaur? it is implied that Elginia belonged to the dinosaur order, while it lived millions of years before the dinosaurs and belonged to the procolophonomorph order.