Eremotherium, also called the Panamerican ground sloth, is an extinct ground sloth that lived in North America and South America during the Pleistocene epoch. It lived from 4.9 mya—11,000 years ago existing (as a genus) for approximately 4.889 million years. It is closely related to modern sloths. E. rusconi reached a length up to 6 m (20 ft) and a weight of more than 3 tons. It is believed that it can burrow in caves tunnel with its sharp claws according to the caves in South America that has claw marks.

It appears as a Glacier Park animal in Jurassic Park: Builder. 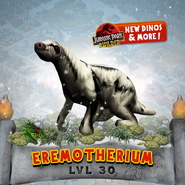 It appears as a Cenozoic animal in Jurassic World: The Game. 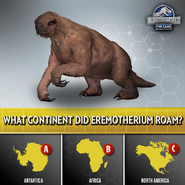 Eremotherium is a common Cenozoic creature in Jurassic World: Alive.