Eric Kirby is a 12-year-old dinosaur enthusiast who becomes stranded on infamous Isla Sorna after a parasailing accident. He has to survive, completely alone, on the island for eight weeks, using only his intelligence and knowledge as weapons.

Eric had read two of Dr. Alan Grant's books, one from before Isla Nublar and one after the incident, stating that he liked the first better as it conveyed Grant liking dinosaurs. He'd also read Dr. Ian Malcolm's book, but found it to be kind of "preachy" and "high on himself", and talking too much about "chaos".

Since his parents, Paul and Amanda Kirby, failed to get any help from either the US or Costa Rica government to rescue him, they resort to inviting Dr. Grant on false pretenses, thus starting the events in the movie.

Although at first, Grant doubts that Eric is still alive, he soon discovers that the boy has managed to survive. Eric saves Grant from a pack of Velociraptors and takes him to his camp in an overturned water truck, its tank providing safe and solid shelter from both the elements and predators. Being a dinosaur lover and having read Grant's books, Eric immediately recognizes the paleontologist and the two start forming a friendly relationship, especially after Grant learns that Eric wasn't a fan of Malcolm's book either.

Later, Eric is reunited with his parents and saved by Billy Brennan from a flock of murderous Pteranodons. In the end, he leaves the island with his parents; although unstated, it is hinted that Paul and Amanda reconcile and get married again. In fact, in a deleted scene from Jurassic Park III, the two of them kiss and decide to come back together for Eric, who watches them in delight.

Eric Kirby was only 13, but showed great intelligence and survival skills for his age, being able to survive on Isla Sorna for 8 weeks alone without being killed by the island's dangerous inhabitants. Some examples include of his skills are using Tyrannosaurus rex urine (remarking to Grant that he didn't "want to know" how Eric collected it) to detour smaller carnivorous dinosaurs like Compsognathus, learning to use gas grenades against the Raptors, and simply acquiring food with prehistoric predators lurking. To avoid being seen while out scavenging supplies, Eric crafted an encompassing cloak covered with leaves for camouflage. Eric also had an interest in dinosaurs, which helped him survive on Isla Sorna.

The first drafts of Jurassic Park III had a kid named Miles that was the son of an actual millionaire. This character would later evolve into the definitive script's Eric Kirby. Even on the website called "Dan's JP3 Page", a part of Miles Roby's script had allegedly leaked, along with his father and another character, who is supposed to be a bodyguard, named Cooper.[1][2][3][4]

After the release of Jurassic Park III, a trilogy of books by fiction writer Scott Ciencin were released; called Jurassic Park Adventures, these short novels focused on Eric Kirby as their main character. It must be noted that these books are not considered canon within the Jurassic Park universe.

In Jurassic Park Adventures, Eric Kirby is once again shown to be an extremely brave person, saving other's lives in several occasions. He is also depicted as being a celebrity due to his writing "Survivor", a book re-telling some of his adventures on Isla Sorna. However, he keeps being humble and unconceited and is confused when a younger kid named Josh seems to worship him and expect impossible things from him.

The first book, Jurassic Park Adventures: Survivor, tells part of the story of Eric's eight weeks stranded on Isla Sorna. The novel is told in the first person, with Eric being the narrator. He is practically the only human character in the story, for his mother and Ben Hildebrand are only briefly featured at the start of the book.

The second and third book focus not only on Eric, but also on Alan Grant, and in their relationship. Eric is shown to hold a great respect and affection to Alan Grant, and Alan admires Eric's intelligence and courageousness, but they often have trouble due to opposed points of view on different subjects, often relating to the dinosaurs of Isla Sorna.

Of all the other characters of Jurassic Park III, only Amanda Kirby plays an important role in one of the books, Jurassic Park Adventures: Flyers

All three books take place shortly after the events in Jurassic Park III, with Eric being 13 years old in the three of them.

Eric Kirby is a playable character in the video game LEGO Jurassic World. He is able to camouflage to get past dinosaurs and use Tyrannosaurus urine to detour small groups of Compsognathus.[5] 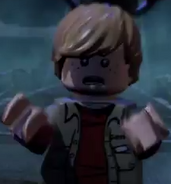 An action figure of Eric Kirby was released after the film, among other characters. Eric's figure came with a Pteranodon that could close its talons on the boy's shoulders just as in the movie. The figure is widely regarded as being one of the best in the series due to its actual resemblance to the film character, whereas the figures some other characters like Paul Kirby didn't bear any resemblance to their film counterparts.

In an interview related to Jurassic Park, Trevor Morgan joked once that his friends bought Eric Kirby's action figure, then fed it to their dogs.