Erlikosaurus is creatable in Jurassic World: The Game as a tournament herbivore.

Erlikosaurus is unlocked by winning a Erlikosaurus pack from either the roulette or if the player places in the top 1% of the Erlikosaurus tournament. Additional individuals can be purchased in the market for 7,000 DNA or found through card packs.

A level 40 Erlikosaurus can be fused with a level 40 Dilophosaurus to create the hybrid Erliphosaurus.

"The Erlikosaurus is the only segnosaurian to be discovered with a complete skull."

"Discovered in 1972, the Erlikosaurus was found at Bayshin Tsav in Mongolia."

"Did you know that the Erlikosaurus is named after a mythological demon king, Erlik, from Mongolian mythology?" 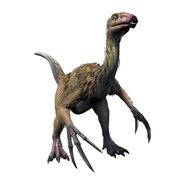 Add a photo to this gallery
Retrieved from "https://jurassicpark.fandom.com/wiki/Erlikosaurus/JW:_TG?oldid=231394"
Community content is available under CC-BY-SA unless otherwise noted.