< Erliphosaurus
View source
watch 01:55
Cobra Kai Season 4 - The Loop
Do you like this video?
Play Sound

Erliphosaurus is a creatable in Jurassic World: The Game as a Legendary Hybrid carnivore.

"The carnivorous Erliphosaurus combines DNA from the herbivore Erlikosaurus and the crested carnivore Dilophosaurus!"

"As the Erliphosaurus ages, spines begin to grow from the back of its head. At full maturity, these turn into its impressive fringe!"

"The fringes of the Dilophosaurus are purely for show. But the hardier Erliphosaurus uses its fringes for defense in battle as well!"

"The Erliphosaurus is among the most colorful dinosaurs in Jurassic World! It uses its bright color as distraction in battle!" 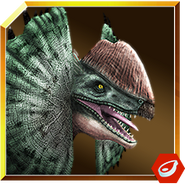