Eryops is a genus of extinct, amphibious temnospondyls. It contains the single species Eryops megacephalus, the fossils of which are found mainly in early Permian (about 295 million years ago) rocks of Archer County, Texas, but have also been found in late Carboniferous period rocks from New Mexico. Several complete skeletons of Eryops have been found in lower Permian rocks, but skull bones and teeth are its most common fossils.

Eryops features in Jurassic World: The Game as an adoptable tournament amphibian. 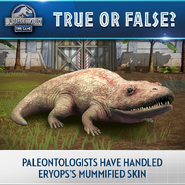 Retrieved from "https://jurassicpark.fandom.com/wiki/Eryops?oldid=209108"
Community content is available under CC-BY-SA unless otherwise noted.