Euoplocephalus is creatable in Jurassic World: The Game as a super rare herbivore.

Euoplocephalus is unlocked by completing the Earth Shattering event. Additional individuals can be purchased in the market for 1,000 DNA or found through card packs.

As of September 30, 2015, a level 40 Euoplocephalus can be fused with a level 40 Giganotosaurus to create the hybrid Giganocephalus.

"Like the Ankylosaurus, the Euoplocephalus has armored eyelids and bone plate armor"

"Did you know that the Euoplocephalus weighs 2 tons? That's more than a Porsche 911!"

"This heavily armored beast has a pair of defensive horns poking from the back of its neck."

"The name Euoplocephalus is Greek for 'well-armed head', due to this dinosaur's thick body armor!" 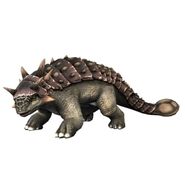 Add a photo to this gallery
Retrieved from "https://jurassicpark.fandom.com/wiki/Euoplocephalus/JW:_TG?oldid=236227"
Community content is available under CC-BY-SA unless otherwise noted.