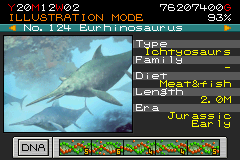 Eurhinosaurus is an extinct genus of ichthyosaur from the Early Jurassic of Europe, England & Germany. It was a large genus, exceeding 6 meters in length. Eurhinosaurus looked like a regular ichthyosaur, with a fish-like body including a dorsal and caudal fin, and large eyes, but had one distinct feature that set it apart from other ichthyosaurs. Its upper jaw was twice as long as the lower jaw and covered with up- and downwards-pointing 'teeth', unlike the sawfish's. It might have been used to search vegetation and crustaceans on the ocean bottom for prey by swinging its upper jaw from side to side against the sea floor like a sawfish, or to violently stab prey to death like swordfish, sailfish and marlins.

Retrieved from "https://jurassicpark.fandom.com/wiki/Eurhinosaurus?oldid=239039"
Community content is available under CC-BY-SA unless otherwise noted.