Father
Mother
Cousin
Franklin Webb is the systems analyst of the Dinosaur Protection Group. In 2018 he and the DPG went on a mission to save the dinosaurs on Isla Nublar from the eruption of Mt. Sibo and subsequently was involved in their rescue from animal traffickers at Lockwood Manor. Four years later, he joins the CIA's Dangerous Species Division, helping to track down and protect the dinosaurs that were released into the wild.

Growing up in Los Angeles, Franklin spent his childhood taking computers apart to see how they worked and turned that interest into a passion for coding and web design. He went on to graduate at the top of his class at MIT. Then Franklin worked at Jurassic World as an IT technician monitoring the private network for glitches. He was initially stationed at an off-site tech complex in Irvine, California, but eventually got to go to Isla Nublar.

Some time after the Indominus rex's escape, Franklin joined the DPG because, despite being slightly afraid of dinosaurs, he believes they have the right to exist as any shark or spider does. Now he runs the DPG's social media and online marketing campaigns, making him a vital asset to expanding the group's reach around the world.

Franklin goes to Isla Nublar with Claire Dearing, Owen Grady, and Zia Rodriguez, in order to track, and eventually save, Blue. He and Claire enter a bunker. Later, after Owen and Zia are double-crossed by Ken Wheatley, he and Claire get trapped in the bunker. As the volcano exploded, the bunker slowly started filling up with lava, and to make matters worse, a Baryonyx attacks them. They escape and run alongside Owen in a stampede of dinosaurs. Franklin and Claire then hop on a Gyrosphere and ride the rest of the stampede, with Owen behind them. Franklin and Claire, nearly drowning, were saved by Owen, and they retreat to shore. The three make it off the island and sneak onto the boat carrying the last of the dinosaurs off the island, and after having been left for dead. He helps hold down Blue while Zia removes the bullet from her hide and gives her a blood transfusion. Shortly thereafter, he is mistaken for a deckhand on the boat and is taken away from the group. Later, he helps Zia escape from the lab under Lockwood Manor by sedating Henry Wu, only to be ungratefully strangled by Zia (which was Zia's unique way of saying "thank you"). He, alongside Zia, tries to save the dinosaurs from dying of hydrogen cyanide poisoning, but the ventilation system is damaged beyond repair, leading to Maisie Lockwood releasing all of the dinosaurs trapped in the manor. After Owen, Claire, Maisie, Franklin, and Zia exit the Lockwood Manor, Franklin and Zia leave to an unknown destination.

Four years after the 2018 Dinosaur Outbreak, Claire, Franklin and Zia work together to protect the dinosaurs by exposing illegal breeding operations to the government. On one such trip, Claire insists upon rescuing a young dinosaur who is in bad health, leading to the three getting shot at. Having had enough after the close call, Franklin and Zia decide to leave, suggesting that Claire should enlist the help of Owen Grady instead. Their mission is nevertheless a success with a guard mentioning a few weeks later to Alan Grant and Ellie Sattler that the illegal breeding operation was shut down following an anonymous tip and the dinosaurs transferred to the Biosyn Sanctuary.

Following the abduction of Maisie Lockwood and Beta, Blue's daughter, Claire and Owen seek out the help of Franklin who now works for the CIA's Dangerous Species Division, helping governments around the world to track down and protect the dinosaurs from Isla Nublar. Although exasperated at Maisie's taking, having forewarned both Claire and Owen that might happen at some point, and initially reluctant to help them, Franklin identifies the poacher who took Maisie and Beta and puts them in touch with an operation led by Owen's old friend Barry Sembène to take down an illegal dinosaur black market in Malta that the poacher is connected to.

Franklin is a nervous and meek person and fearful of the world overall. From the safety of airtravel to the wildlife of Isla Nublar, to the very extraordinary situations he finds himself in. Demonstrated most verbally when in encounters with animals like the Baryonyx as he screams loudly. He is prone to panic in dangerous situations, often screaming when in any sort of danger. Despite his fragility, he is a remarkably competent individual, even under pressure.

Franklin openly states he is "not compatible" when he first meets Owen Grady, a man who is much like a typical action hero. He similarly bickers with friend Zia Rodriguez for similar reasons. However, Franklin is shown to respect Claire Dearing and supports her mission. Despite his open admittance of fear and nervousness, Franklin is shown to be very confident in his skills as a systems analyst - ranging from simple social media management to complex computer systems programming.

Although fearful of the carnivorous dinosaurs, that Franklin is a part of the DPG demonstrates he holds empathy for and cares about the dinosaurs as a whole. This is shown explicitly when Claire Dearing remarks that all the dinosaurs will die if no one cares. The first to speak up in support is Franklin who responds "we do". Franklin was also seen as being more capable and brave than he may realize such as with his keeping up with Owen and Claire when encountering various dangerous dinosaurs and later on when he rescued Zia. Notably, while initially reluctant to risk himself to help Blue after she got shot, he is visibly sympathetic to her pain during the operation.

According to Smith, Franklin is a young, fragile, anxiety-ridden computer genius who's more comfortable in front of a computer screen than anywhere else. Smith also calls Franklin socially awkward in his friendship with Zia Rodriguez, who constantly picks on him for "being a wuss" and Franklin fails to make a comeback at her no matter how much he tries.

As seen in the behind the scenes features of the Fallen Kingdom Blu-Ray and an HBO Preview Special, Smith would be subjected to "unexpected scares" by Bayona to capture his genuine reaction. This included scenes filmed where Smith's character played with a lightbulb that exploded and other instances of Bayona playing the actual roars of the T-rex for Smith's screaming scenes.

It has been noted in interviews that the role of Franklin - a computer expert - was most likely meant for Jake Johnson's character Lowery Cruthers from the previous movie. Both Smith and Johnson will return together on screen for Jurassic World: Dominion. 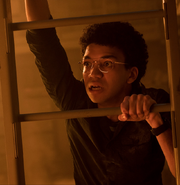 Franklin has his own figure for Mattel’s line.