The Lost World (Document only)

"They're flocking this way."
—Tim Murphy(src)

Gallimimus is an extinct genus of ornithomimid theropod dinosaur that lived in Mongolia during the Late Cretaceous period around 70 million years ago. It was a speedy theropod, the largest of its type. They were called chicken mimics because they probably moved like modern flightless birds. Unlike other theropods, Gallimimus had no teeth. In fact, it had a very small head. This was probably one of the fastest dinosaurs, with speed like an ostrich, it could probably run up to 30 miles per hour.

With its small, toothless head, it is believed that Gallimimus probably had a diet of insects, small animals, eggs, and maybe even some plants. They had a much longer neck than any other theropod dinosaur.[1]

Forty four Gallimimus were successfully recreated by InGen[2][3] in the lab[4] on Isla Sorna[5][4] where they were parented and fed in captivity on the island.[4] The cloned Gallimimus moved in flocks and had a color scheme that varied depending on an individual's age[2] and gender.[citation needed]

Like all of InGen's cloned theropods, Gallimimus had pronated hands. Because of a Null allele created from the mutation and manipulation of its genes as well as the addition of frog, reptile, and bird DNA, the cloned Gallimimus lacked feathers.[6]

The males were occasionally a bright orange and darkened patterns of red and orange from head to tail,[citation needed] the females were duller in color from most of the body having a peachy color along with three shades of brown (beige, sand, tan), need least to say about their neck and head which were purplish with dark purple stripes over with a streamline of orange leading up to the head which ended off with a bright yellow. Unlike the adults, the juveniles have a color scheme based on much like that of fawn. They have a mossy green, almost translucent color to their bodies and have a diverse number of spots on them.[2]

Twenty four Gallimimus were transported to the island Isla Nublar[5] to live in the Gallimimus Enclosure of Jurassic Park.[2][3]

When Dennis Nedry disabled Jurassic Park's electric fences, Gallimimus was free to roam the island like most of the dinosaurs in the park.

On the second day of the Isla Nublar Incident, Dr. Alan Grant and the Murphy children witnessed a Gallimimus flock in its enclosure fleeing from Jurassic Park's Tyrannosaurus rex. The T. rex managed to kill one unlucky individual who tripped on another Gallimimus when the flock was running for safety.[2] This individual's remains would remain on the island for over a decade and was still there in the same location as it died in 2002.[7]

By 1994, the Gallimimus population on Isla Nublar had been brought down to nine individuals because of continuous Tyrannosaur attacks.[3]

When Hurricane Clarissa struck Isla Sorna, the InGen personnel left the island. The twenty remaining bird-like dinosaurs were either set free by the workers or broke out on their own because the storm had damaged the fences. Gallimimus roamed freely across the island.[5][3]

The theropods had to learn to live in the wild. Since they no longer received lysine supplements in their food, they started to eat lysine-rich foods.[5]

They were known to have resided in the southeast of Isla Sorna coexisting with other herbivores Mamenchisaurus, Parasaurolophus, and Pachycephalosaurus. Galimimus also made up a good portion of the fauna of that region.[5]

During the Isla Sorna Incident of 1997, two adult Gallimimus were captured by the InGen Hunters for Peter Ludlow's Jurassic Park San Diego, but were freed the following night by Nick Van Owen and the Gatherers along with the rest of the dinosaurs held captive by the hunters.[5]

Gallimimus was one of the many dinosaurs that lived in Masrani Global Corporation's dinosaur park, Jurassic World. They retained many characteristics of the previous clones, albeit being a foot taller and having teeth and being different colors, dull orange with a creamy underbelly and brown stripes on the backs. The theropods lived in the self-titled Gallimimus Valley. Some of the juveniles also lived in the Gentle Giants Petting Zoo. After the escape of the Indominus rex caused the closure of Jurassic World, the Gallimimus returned to roam freely on Isla Nublar.[8]

Approximately six months after the fall of the Jurassic World, as well as several other dinosaur species, the Gallimimus was hunted down by the hybrid dinosaur Scorpios rex after it escaped the suspended animation caused by freezing in which it was placed by Dr. Henry Wu.[9][10]

It is revealed that there are surviving Gallimimus populations on Isla Nublar, as they faced an impending danger, alongside many other creatures, in the form of an erupting volcano.

They were seen running alongside many other species away from Mount Sibo. Some Gallimimus were also captured and taken to Lockwood Manor for an auction but thanks to Claire Dearing and Maisie Lockwood, they would eventually escape the estate along with the other dinosaurs. Gallimimus inhabited several basement cages, knowing that there were at least 3 Gallimimus in cage 02.

According to Dinosaur Protection Group, Gallimimus was subject to cruelty some time in the past.[11] 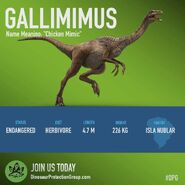 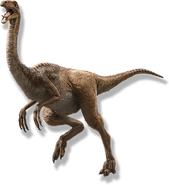 Darius attempting to feed a Gallimimus

The Gallimimus stampede featured in the first film was envisioned very early in its development by Steven Spielberg.[12] The scene itself appears is an adaptation of a similar event in the chapter "Dawn" of the first novel which featured Grant and the Murphys witnessing the adult T. rex chase a herd of Hadrosaurus. Phil Tippett proposed that the Hadrosaurus herd be replaced by that of Gallimimus because they "could reach a higher speed"[13] and this proposal later became final.

When designing the Gallimimus for Jurassic Park, conceptual artist Mark "Crash" McCreery used the modern Emu as the main source of reference in its design.[14] Director Steven Spielberg wanted the Gallimimus to be bird-like[15] as well as wanting its color scheme to be like that of a colorful bird.[16] Paul Mejias sculpted the maquette from McCreery's concept art and finished sculpting it in March of 1992. This maquette would be used by ILM for both the adults and juveniles of the herd seen in the film.[17] When creating the legs of the sculpture, Paul used reference photos of ostrich feet.[15] Steven Spielberg picked a color scheme out of several coloration designs created by various crewmembers of Stan Winston Studios.[16] The design selected was different than that seen in the final film. The painted maquette was a dark brown with dark blue striping instead of bright earth orange and white like that seen in film's Gallimimus.[18]

Tests of a computer-generated of a Gallimimus herd and a Tyrannosaurus created by Industrial Light and Magic was what convinced Spielberg to replace the go motion dinosaurs that were planned to be used in for wide shots of said creatures solely with CGI. Though Phil Tippett had added a motion blur to the stop motion dinosaurs that was absent from previous films that featured go motion creatures, such as 1963's Jason and the Argonauts, but Speilberg felt that the movements of the dinosaurs were still jerky. Dennis Muren then suggested to Speilberg that ILM create computer-generated full-sized dinosaurs. Interested, Speilberg requested a test be made featuring CGI dinosaurs. In the first of a series of tests, ILM created a herd of Gallimimus running[19] through a still photograph of Hawaii.[20] Steven was impressed by the how smooth the Gallimimus moved[19] as well as how authentic the rendering was,[20] but he was not fully convinced to use CGI for the dinosaurs until ILM made more tests featuring a fully fleshed T. rex and said T. rex chasing a herd of fully fleshed Gallimimus.[19]

The flocking scene was filmed at Kualoa Ranch on the Hawaiian island of Oahu due to Hurricane Iniki canceling further filming on Kauai.[21] It was to be the last scene to be filmed in Kuai before the hurricane occurred.[22] The Gallimimus herd in Jurassic Park were the next dinosaurs that ILM created after the Brachiosaurus during post-production. The ostrich was used as an animation reference for the Gallies by ILM.[19] Another reference for animating the herd, particularly when they jumped over the fallen tree, was simply personnel for the movie running and jumping over a scale version of the fallen tree while being filmed. During the filming of this reference footage, TyRuben Ellingson—who created the storyboard for the flocking scene and participated in the shooting of the footage—accidentally tripped over the scale log and broke the elbow of his drawing arm, an injury that required him to have surgery. When Phil Tippit heard of Ellingson's accident, he said, "Well, then one of the Gallis is going to need to take a fall. If it happened to Ty, it would have likely have happened in the wild." Because of this, the animators included a Gallimimus that trips on the fallen tree and falls to the ground before regaining balance during the flocking sequence.[12] The color scheme of the adult Gallis was changed by ILM to more bright earth orange and white. The creator of the Gallimimus maquette, Paul Mejias, personally preferred the color the digital artists chose.[16] The Gallimimus was the only dinosaur in the first film that was never physically on set but was instead entirely CGI.

The sounds made by the Gallis in the first film drew from various sources. The sound of the stampeding flock was created from actual, yet smaller, stampedes of cattle and horses.[23] The Gallimimus squeals came from a female horse[24] while the sound that the Tyrannosaurus makes when she shakes the Gallimimus that she promptly kills was simply Gary Rydstrom's dog playing with a rope toy.[19]

In its appearance in The Lost World: Jurassic Park, the Gallimimus model from the previous film was updated for the sequel.[25]

In the original storyboards of the second film's official ending, the other dinosaurs of Isla Sorna, but the ostrich-like dinosaur was cut from the final production.[citation needed]

It's very odd that on the Jurassic World website, Gallimimus have teeth in the model when in the movie, there is no real sign of teeth, and the website itself says they have no teeth.[26][27] The ones in Jurassic World: Camp Cretaceous also seem to have molar-like teeth.

Gallimimus appears in the dinopedia of the Jurassic Park Institute alongside a synonym of Gallimimus, "Sanchusaurus".