Start a Wiki
watch 01:48
The Loop (Movies)
Do you like this video?
Gallimimus can be created in Jurassic World: The Game as a Rare herbivore.

It is unlocked by completing an Earth Shattering Event. More individuals can be purchased in the market for 580 DNA or found through card packs. As of April 1 2020 a Level 40 Gallimimus can be fused with a Level 40 Ophiacodon to make the Hybrid Ophiacomimus. 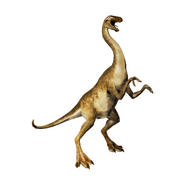 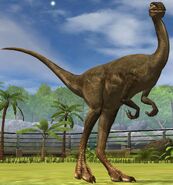 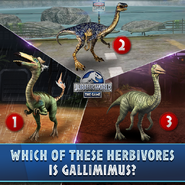 Add a photo to this gallery
Retrieved from "https://jurassicpark.fandom.com/wiki/Gallimimus/JW:_TG?oldid=237275"
Community content is available under CC-BY-SA unless otherwise noted.