The game trail was an area of Isla Sorna that Peter Ludlow’s team followed soon after their arrival on the island in 1997. When Ludlow began to give orders to set up base camp on it, he was quickly admonished by Roland Tembo, who immediately reminded him that carnivores hunt on game trails. After this, the team could be seen capturing dinosaurs in this area for later transport to the as yet incomplete Jurassic Park: San Diego. The long plain was composed of a terrain of sparse, thin grass, and dotted with small ferns. The expanse was surrounded entirely by thick coniferous forest and passed along a coastline. Herbivores known to frequent the game trail included Mamenchisaurus, Parasaurolophus, Pachycephalosaurus, and Gallimimus, and predators included Tyrannosaurus and Compsognathus.

The game trail was filmed completely on location in northern California, near the Redwoods State Park. Shots of the trail were split between two locations: Patrick's Point State Park, and a private ranch in Fieldbrook. The sequence starts in Patrick's Point on a road, before splicing to the private ranch for the opening shot of the trail itself. To increase the percieved size of the ranch, the InGen vehicles were driven in large circles to give the impression that the location was larger than it really was. Shots taken of Ian Malcolm's team atop a rocky outcrop were again taken at Patrick's Point State Park, on Ceremonial Rock. The scene then continues on the private ranch to its close.

Gallery of Game Trail and Environs 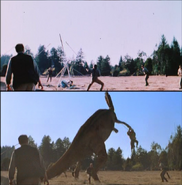 View from atop Ceremonial Rock

Private ranch in Fieldbrook, California
Add a photo to this gallery
Retrieved from "https://jurassicpark.fandom.com/wiki/Game_Trail?oldid=247200"
Community content is available under CC-BY-SA unless otherwise noted.