Jurassic Park: Builder
Jurassic World: The Game
Gastornis is a species of large flightless bird that lived during the early Cenozoic era. Its fossils have been found mostly in Western Europe and also in North America, where it was previously known as Diatryma.

Gastornis species were very large birds, and have traditionally been considered to be predators of small mammals. However, several lines of evidence, including the lack of hooked claws in known Gastornis footprints and studies of their beak structure have caused scientists to reinterpret these birds as herbivores that probably fed on tough plant material and seeds.

The largest known species, G. gigantea could grow to the size of the largest moas, and reached about 2 m (6.6 ft) in maximum height.

The 'lip' of the beak was straight, without a raptorial hook as found in the predatory phorusrhacids. The nostrils were small and positioned close to the front of the eyes about midway up the skull. The vertebrae were short and massive, even in the neck. The neck was relatively short, consisting of at least 13 massive vertebrae. The torso was relatively short. The wings were vestigial, with the upper wings bones small and highly reduced, similar in proportion to the wings of the cassowary.

European Gastornis survived somewhat longer than their North American and Asian counterparts. This seems to coincide with a period of increased isolation of the continent.

Gastornis can be created in the Glacial Park of Jurassic Park: Builder. Gastornis is portrayed as a carnivore, but recent evidence suggests it was actually herbivorous.

Gastornis can be created in the Cenozoic Park as a tournament Savannah creature. Like in Jurassic Park: Builder, it is portrayed as a carnivore since it uses the same animations as Phorusrhacos, even though the fact that it is herbivorous is brought up in a trivia point. 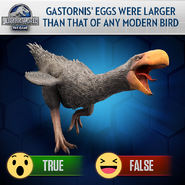 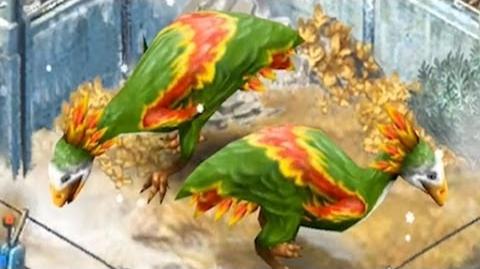