"Hold on tight and interact with our baby Triceratops at the child-friendly Gentle Giants Petting Zoo."
—Park Map(src)

The Gentle Giants Petting Zoo is an attraction in Jurassic World where many herbivore dinosaurs are pet and fed and even ridden on by guests. Among the juvenile dinosaurs that reside there are Triceratops, Apatosaurus, Stegosaurus, Parasaurolophus, and Gallimimus.[1] It's possible that this is where the baby herbivores in the park spend some of their early lives here before they are sent to their known exhibit to be taken care of by adoptive parents of their species. Visitors are advised to remove certain items, such as straw hats because the juvenile dinosaurs will attempt to consume them.[2] 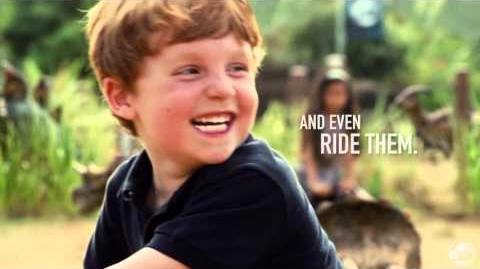 Description from the JW map

The Zoo during the Pterosaur attack.

Kids ridding Triceratops with Stegosaurus and Parasaurolophus in the background 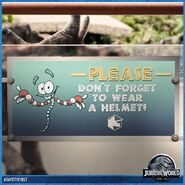 The food kids feed to dinosaurs 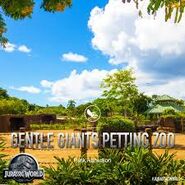 Triceratops in the Petting Zoo

Zara in the petting zoo
Add a photo to this gallery

In the Jurassic World storyboard, Microceratus was supposed to live in the Gentle Giants Petting Zoo.[3]

Originally, the safety helmets designed like a theropod head that the kids wear while riding Triceratops were to simply be baseball caps with three horns attached.[4]

The boy that hugs the small Apatosaurus in Jurassic World is played by Bryce Dallas Howard's own son.[5]

The scene in the petting zoo is likely a homage to the deleted scene in the first film where Lex Murphy and Tim Murphy rode a baby Triceratops.

The petting zoo was filmed in a modified elephant enclosure in the Honolulu Zoo.[6]

Retrieved from "https://jurassicpark.fandom.com/wiki/Gentle_Giants_Petting_Zoo?oldid=228790"
Community content is available under CC-BY-SA unless otherwise noted.