Geothermal Power Plants are reactors that generate electricity from heat inside the Earth's crust. This energy is clean and sustainable.

In The Lost World novel Dr. Ian Malcolm and the others find a geothermal power plant on Isla Sorna. Located behind the Laboratory Complex on the far end of the Worker Village on Isla Sorna, the Geothermal Power Station was a large blocky building with a metal roof the size of a power plant that would be used to power the entirety of a single small town. The area around the Geothermal Plant stunk of sulfur that was a natural occurring element of volcanism, which the Plant was accessing for its energy. The Plant is noted to be incredibly advanced for its time.

The exterior was a windowless, featureless, concrete structure marked only by a corrugated steel rim at the top used for ventilation. The vents at the top were rusted brown and were adorned with flecks of volcanic sulfur by the many year of neglect since InGen abandoned the island in late 1989. The entrance was a heavy steel door located at the back of the building. The interior was a maze of piping, their respective valves all coated in sulfur. A vent inside the plant housed a turbine made of a gold alloy. Along one wall was an electrical panel that was spotted with mold and dented in several portions.

As Eddie Carr described the process InGen used, the plant tapped into the Earth’s natural heat energy, either gas or steam, and piped it up through the floor. The extracted heat is then used to boil water in a closed cycles, which then moves the turbine to create electrical power. An unfortunate side effect to geothermal power was that it was often incredibly corrosive, however the Isla Sorna Geothermal Plant showed little to none of this corrosion.

The above mentioned scene in the book influenced the movie The Lost World: Jurassic Park.

Peter Ludlow says at one point:

Hammond ran everything on geothermal power, it was never supposed to need replenishing. It should still work.

The power plant is never seen in full, but merely glimpsed on film while more complete views can be seen in behind-the-scenes footage. The full structure is a rectangular building with a smaller rectangular structure connected to it from the front by two pipes. The roof of the geothermal plant is adorned by two cylindrical towers. The plant connects to the cage of piping that Ian Malcolm and company pass under on their way into the Worker Village. In the Worker Village, Nick Van Owen simply has to turn a switch to bring the power on.

In the novel, a power plant was briefly mentioned, but wasn't explored. Because Isla Sorna run on geothermal power, it is assumed by fans that Isla Nublar run on the same power. Isla Nublar was also a very volcanic island, particularly the southern region.

The references to geothermal power plants inspired the scenario Power Plant in Jurassic Park: The Game. 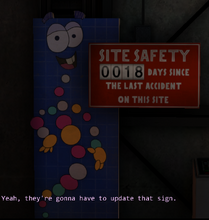