Giganocephalus is a genetically modified hybrid of Giganotosaurus and Euoplocephalus in Jurassic World: The Game.

Giganocephalus is of the hybrids that can be created in the game. It and Pachyceratops were able to created for the player's park on September 30th, 2015. 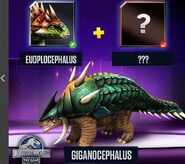 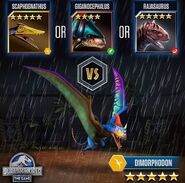 Concept Art
Add a photo to this gallery

Retrieved from "https://jurassicpark.fandom.com/wiki/Giganocephalus?oldid=209120"
Community content is available under CC-BY-SA unless otherwise noted.