Start a Wiki
watch 01:18
The Loop (Movies)
Do you like this video?
Giganotosaurus is creatable in Jurassic World: The Game as a Rare carnivore.

Giganotosaurus is unlocked by completing the Earth Shattering event. Additional individuals can be purchased in the market for 520 DNA or found through card packs.

As of September 30, 2015, a level 40 Giganotosaurus can be fused with a level 40 Euoplocephalus to create the hybrid Giganocephalus.

"Did you know that the Giganotosaurus is one of the largest known land-based carnivores?"

"The Giganotosaurus is one of the genetic templates used in creating the fierce Indominus rex!"

"A Giganotosaurus bite is three times less powerful than a Tyrannosaurus rex's. Still strong enough to snap you in half though!" 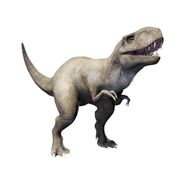 Duplicate Dinosaur Glitch
Add a photo to this gallery
Retrieved from "https://jurassicpark.fandom.com/wiki/Giganotosaurus/JW:_TG?oldid=236219"
Community content is available under CC-BY-SA unless otherwise noted.