Glyptodon ("grooved or carved tooth") was a genus of large, armored mammal of the subfamily Glyptodontinae (glyptodonts or glyptodontines) – relatives of armadillos – that lived during the Pleistocene epoch. It was roughly the same size and weight as a Volkswagen Beetle, though flatter in shape. With its rounded, bony shell and squat limbs, it superficially resembled a turtle, and the much earlier dinosaurian ankylosaur – providing an example of the convergent evolution of unrelated lineages into similar forms. Glyptodon measured 3.3 metres (11 ft) in length, 1.5 metres (4.9 ft) in height and weighed up to 2 tons (4,000 lb).

Glyptodon originated in South America. Their remains have been found in Brazil, Uruguay and Argentina. Of the Glyptodon species attributed to remains discovered in Brazil, G. clavipes had the largest range. Its distribution includes north, northeast, and southeast Brazil. G. reticulatus remains have only been found in southern Brazil.

The feeding habits of Glyptodon, based on their jaw morphology, were herbivorous. Glyptodon had an "elaboration of the osteodentine ridges in their jaw that provided an effective grinding mill, causing the food particles to be pushed and sheared through constant motion of the mandible, allowing Glyptodon to consume their dietary needs." They had a well-developed snout musculature, along with a mobile neck region that helped them secure food. Like most other xenarthrans, glyptodonts had lower energy requirements than most other mammals. They could survive with lower intake rates than other herbivores with similar mass. Glyptodon grazed near water sources such as rivers and lakes. Based on stable isotope analysis, it is evident that its diet consisted primarily of dicotyledonous trees and monocotyledonous grasses.

Glyptodon was added as a rare Cenozoic cavern on November 21st, 2017 in Jurassic World: The Game. 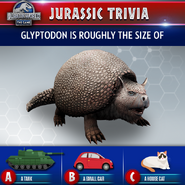 Retrieved from "https://jurassicpark.fandom.com/wiki/Glyptodon?oldid=230921"
Community content is available under CC-BY-SA unless otherwise noted.